Skip to content
This Anime is Faithful Virgin Trash
anime

This Anime is Faithful Virgin Trash

You only get one shot.  If the first episode of an anime doesn’t impress me, it’s getting dropped. So, did My Girlfriend is a Shob**h impressed me in its first episode? No. It’s often said that the best way to court attention is to generate controversy.  Companies and brands understand this well. Let me use some examples real quick. During […]

You only get one shot.  If the first episode of an anime doesn’t impress me, it’s getting dropped. So, did My Girlfriend is a Shob**h impressed me in its first episode?

It’s often said that the best way to court attention is to generate controversy.  Companies and brands understand this well. Let me use some examples real quick. During the 2000s,  Rockstar Games used the negative press of their Grand Threat Auto series as a positive in order to boost sales.  It worked in their favor. Vince  Mcmahon, CEO of the World Wrestling Entertainment (WWE), saved the company with the Attitude Era; a controversial period during the late 90s that used politically incorrect and sexual themes aimed at adults. Hell, there’s a certain notorious cosplayer right now gaining attention through controversial lewd cosplays.

So, when I first heard the title My Girlfriend is a Faithful Virgin Bitch, my eyebrows rose a bit.  The title alone was enough to grab my attention.  “Jeez, Japan.  You guys are getting bolder.” I told myself.  For real, who goes around calling their girlfriend a “faithful bitch”?  I’m not a domestic violence expert, but I’m sure that’s a red flag for an abusive relationship.  I mean, congrats on finding a girl who ain’t fucking other dudes behind your back, but did you really have to call her a faithful bitch?

With a controversial title like that, I had to do some research on the anime.  I went to My Anime List and some anime pages on Facebook to gain some knowledge on Shobitch. Fans of the original web manga were going around telling others not to panic!

“It’s not like all other trashy, horrible romcom anime out there today!  Shobitch is different!”  One zit face ridden weeb stated   “Shobitch is not bad at all! It’s funny and cute!  Don’t take the title at face value.”

For a second, I had faith in this stranger’s words.  Maybe he’s telling the truth, and Shobitch isn’t like all the other romcom anime series out there.  The title is just something to bait people into watching it.  I should give it a chance.  Just because the cover art shows the main girls looking at a banana, commonly used as a  phallic symbol, doesn’t mean this anime is going to be ecchi trash. Have faith in these weebs, Benjamin! …And  then I remembered why I don’t have faith in most anime fans.

I went to my favorite source for anime, pulled up Shobitch, and played the file.  The anime starts with a boy and girl in their teens in some field lookin’ stupid.  The girl speaks.

“I, right here and now…will raise my skirt and display myself to you.”  Joy. Oh joy.  Another romcom opening up with a panty sho- hold up! Did this bitch straight say she ain’t got no panties on?  Am I 10 again sneaking into the living room at 2AM to watch that Wax-a-Million music video on  B.E.T. Uncut?

But seriously.  This anime isn’t opening up with a panty shot.  It’s a straight up vag shot.  A censored vag shot, but a vag shot regardless.  Or maybe not, as the dude was dreaming the whole thing. Doesn’t matter, really. As I’ve stated before in my Hajimete no Gal first impression review, if your anime opens up with panty shot, then you have no confidence in your work.  So, if your anime opens with a girl flashing her vagina in the opening scene, then you should never work in the anime industry.

Dude wakes up and gets an eyeful of some girl’s ass.  Great.  I see where this is going now. Next, he spots his crush (the girl in his dream) and talks about her in some inner monologue bullshit that I don’t care for. Kosaka Whatsherface is her name. The guy wants to be her boyfriend. He plans to confess to her later that day.  They meet up after school.  He confesses and Kosaka accepts.  Not only does she accepts, Kosaka tells dude that she’s gonna learn 48 different positions for him so they can have a good time.

“Benjamin. Abandon ship.  Why are you torturing yourself by watching trash tier anime? Go play that Fire Emblem 4 romhack with those Touhou characters.  Go watch better anime.  Don’t do this to yourself.” My gut was trying to tell me to stop but I refused.  It’s my duty, obligation, and responsibility to tear apart bad anime – no matter what ill results may come to me and my mental health.

I should have I listened to my gut.

The OP begins.  We see Youmu Konpaku, err, Yuki Nagato, wait no, Kosaka Whatsherface (look, all silver hair, blue eyes anime, and video game girls look alike to me.  I don’t care; I’m anime racist) half naked and dressing.  As she leaves her house, the camera pans up to her skirt for a panty shot. At that point, I stopped watching the OP. I went on my phone to watch some fight compilation on World Star Hip Hop (WSHH) to past the time.  As I’m scrolling through WSHH my eyes peep the TV screen to check if the OP finished   I was greeted to Kosaka, completely naked, sitting on a cake.  Oh, and she was taking a loud of white frosting on her face in a suggestive matter.

The OP ends and the episode resumes.  We get some annoying brunette girl screeching, running down the hall and glomping Haru from behind. She’s followed up by another girl wearing some catgirl bullshit trying to take both of them back home with her like she’s Rena off Higurashi or something.  Later, Haru daydreams about Kosaka. He debates if he should talk to her about her about asking her hobbies and interests.

To the surprise of nobody,  Kosaka appears. Haru gets all giddy inside.  He has a chance to ask her what she enjoys face-to-face.  And hey! Kosaka has the same idea in mind.  She wants to get to know her new boyfriend better as well.  You know, it what makes a strong, solid relationship. Communication is key in these things.

You gotta ask your new boyfriend or girlfriend things. Things such as what they’re favorite color, what type of foods they love, who is their favorite music artist, and what do they like to do for fun.  Oh!  Don’t forget to ask what kinda fetishes do they have in the bedroom.  Yeah, Kosaka asks Haru what type of fetishes he’s into for some odd reason.

…at least she’s thoughtful.  I guess. 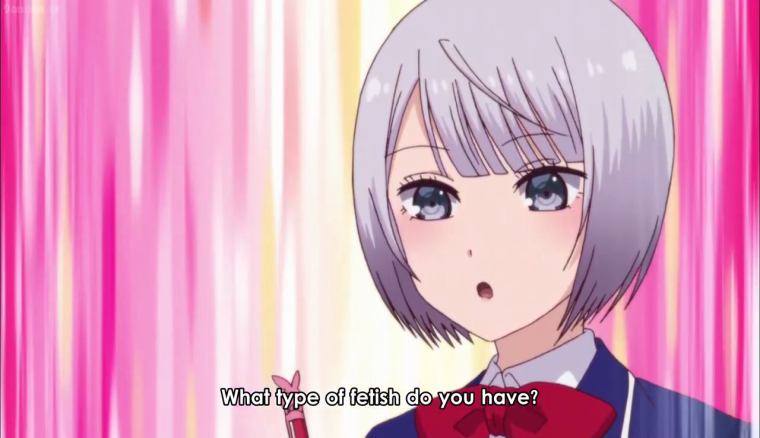 The scene transition to a boob gag to remind us that Kosaka is well endowed (as it wasn’t obvious enough in the OP).  As she helps their teacher, she places her breasts on top of the books, and carry then them out.  She then asks Haru if he’s a masochist because…I don’t know nor do I care anymore.  In less than eight minutes, I could tell that this anime was just going to be terrible.  It was at this point I started asking myself questions:

“Do I hate fun?”
“Am I secretly a masochist and is my pain kink is watching terrible anime?”
“Is this what they mean to turn your brain off and enjoy something even though its horrible?”

Besides this anime sucking, what also sucked that I drank all my alcohol from the day before (to relieve work-related stress).  That bottle of Peach New Amsterdam vodka sure would have helped get me through this trash. Maybe being under the influence of alcohol would have made this a little bearable.  Wait, actually no.  It wouldn’t.  It would have just me even angrier that I was wasting my time on such bullshit.    Then again,  in retrospect, Drunk Ben is smart enough to turn off this anime so he wouldn’t have to suffer any longer.

(Goddammit angry Alcoholic Worker Ben! Was getting afternoon drunk worth it?)

The next scene shows Kosaka eavesdropping on two girls talking about their relationship issues.  Kosaka butts in. She tells the girls that the best way to get their boyfriend’s attention is to say “Nyan” after each sentence.  Ya know,  like one of ‘em socially awkward annoying high school weeaboos who wear cat ears all day. Her next advice to the girls was to not wear any panties around their boyfriends to make ‘em happy.  Yeah.  This is the character of Kosaka: A perverted airhead who think sex and being a catgirl will solve everything in the world.   Kosaka is a tad bit off (as her peers states) Maybe she doesn’t know how a relationship work.  Maybe she thinks sex should be a priority in it.  It’s her first time having a boyfriend, so I should be a little merciful.  But I won’t.

At was at this point I got bored with this anime. I simply turned off my TV, went on social media and started ranting about how terrible Shobitch is. After my rant, I dropped the anime.

I’ve concluded that I shouldn’t do these types of shows.  Maybe there are good, romcom anime that isn’t utterly perverted (or the perverted jokes are actually funny) but I haven’t discovered them yet.  My Girlfriend is a Shobitch isn’t one of them.  The jokes doesn’t make me laugh (given I’m way out of pubtery I gues).  Both main characters are utter idiots, with Kosaka being an airhead, monotone pervert.   Her voice is as boring as the show.  The only good things I can say about this show is that the animation is decent and  the girl is more sexual forward in a genre where its the male who is sexual forward. Also, I will admit it was (laughably) cute to see  Kosaka work hard to be a good girlfriend to Haru.
This show is getting dropped.  I have better shows to watch and review.

My Girlfriend is a Faithful Shobitch (c) 2017 Diomedea, Studio Blanc