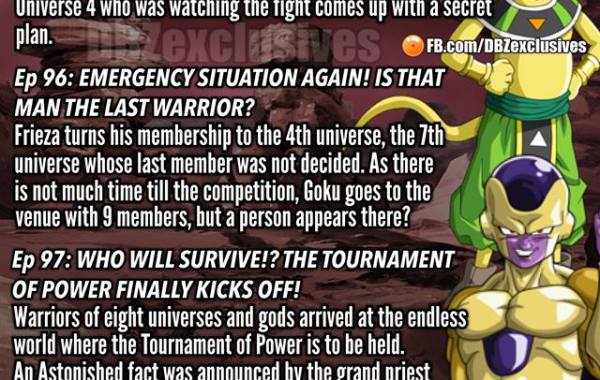 So, remember from this past Monday (6/5/17) when an anonymous 2chan poster leaked information on Dragon Ball Super Eps. 95-98 with full episode titles, summuary, and staff listings?  Well, there’s a funny thing about the information.  Two of the episodes information was confirmed “fake”.  However, the “faker” managed to accurately guess three of the episodes titles and information correctly.  Yes.  Despite the 2chan  leaker bullshiting us on two episodes, somehow, he figured out the titles of the episodes and the summary without flaw.  There’s even more to this new mystery!

As of right now there isn’t any  information about Frieza betraying Team Universe 7 and joining Team Universe 4.  That has yet to be confirmed or deny.  Yamcha replacing Frieza and making a come has also not yet been confirmed or deny (even with Toru Furya’s tweet detailing his  voice work as Yamcha), and Locca’s Tower tweet confirming that they’re working on a new ending theme for Super.  Either way, the “faker” succeeded in great timing with those moves.

Real shit; I cannot hate on the dude who created the bullshit leaks.  This person is obviously well researched with his information on the Toei staff (as he correctly “leaked” Toshio Yoshitaka writing Episode 94) for Super.  It’s clear that the guy put forth the effort to study the staff and strategically line up the staff members to each episode’s leak, real or fake.
In any case, here what we know so far.

CONFIRMED:
*Toshio Yoshitaka will be the writer for Dragon Ball Super Ep. 94
*Episode 97’s Leaked Title “Who Will Survive? Tournament of Power Begins!” (Title is slightly different.  There’s a kanji that is not used in the official title but that’s it).
*Episode 98’s title undecided.
*Locca’s Tower working on a new ending theme
*Toru Furuya’s tweet

MISC:
*Toshio Yoshitaka states that 2chan leaks are fake, however, the fandom is split on his comment.  He could be trying to be secretive about the Tournament of Power information, or doesn’t want to risk losing his job.

*Toei Animation may be keeping things under wrap to avoid spread of information.

I honestly can not hate on the fake leaks.  Dude is incredibly smart and played the entire fandom, including longtime respected members who actively debunk fake leaks. It’s possible that Toei might be creating fake leaks to build hype, but we do not know just yet These fake leaks are now more advance as we got people naming staff  and creating legit sounding episode titles and summaries, so be careful if you see a leak.  In all honestly, this makes things exciting by the day.

Anyways, I’m out!  Just wanted to update you guys on what’s going on with the Super leaks!  Thanks for reading I’m going to bed.  I got work in the morning.

Geekdom 101’s video on the new information on the leaks:

Alright everyone here’s a little status update for this blog and my plans for this month! Thank you for your support and taking time to read my posts by the way!

I will be at the anime convention Naka-Kon in Overland Park, KS this weekend (March 10th-12).  There will be small, quick posts about my adventures and pictures as well.

The first is a rather passionate essay on how I fell in love with the series based on the infamous episode 117, my first episode of the series.

The second is an in-depth analysis on the theatrical themes of the Infinity arc.  I am looking forward to having a lot of fun researching and writing about the themes!

Finally, for the Dragon Ball Z analysis, I’m planning on an essay on the pure stupidity of series’s “hero” Son Goku.

Because I desire to have these three essays to be of high quailty, I won’t be posting here as often in the past for this month.  I may have a few quick posts here or there, but the main focus are these three pieces.

Anyway, I hope you guys have a great and exciting March!!