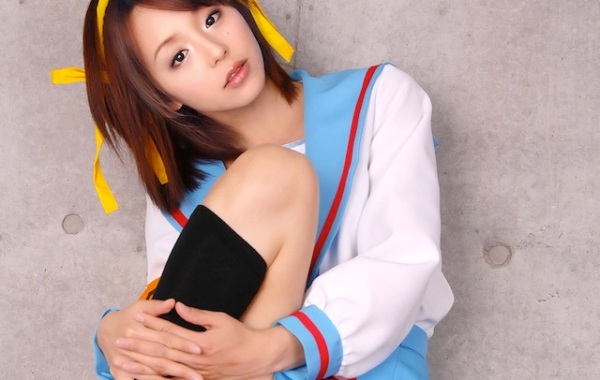 I don’t really pay attention to voice actors to the point where I can say something like “Yea!  That person is my favorite V.A. for all time!”.  As much of a trashy weeaboo that I am, I’m not really too hip on the world voice actors. I simply don’t invest the time to study and research them.  Regardless, I must go forth with this challenge.  I’ll just bullshit and write about one voice actress I do like.   I figure the fact that I wrote about the amazing “God Knows…” scene from the Haruhi Suzumiya anime,  I might as well  keep the Haruhi train going by talking about Aya Hirano.  And of course, her infamous scandal  – because why not?

It’s funny to talk about how mad people were at  her  for enjoying umm…physical pleasures.

High-key, Hirano was my first and only celebrity crush.  Or voice actress crush.  Whatever.  She’s cute as all hell.  Who doesn’t like cute women? Outside her looks, I love her performance as Haruhi Suzmiya – it was fun listening to her as  this energetic, ambitious teenager who believed herself as the  most superior being in the universe.  She also did very well in her role  as otaku Konata Izumi from Lucky Star.  I prefer the Japanese sub of both series over the English dubs just because of Hirano’s performances as both characters.

While this is still fresh in my mind, I gotta talk about her sex scandal (I really wish I was drunk for this one to go  all in. Alas, I must save my alcohol for the upcoming weekend).

To this day, I still  chuckle about how  her overly sensitive fans  were so butthurt about the 2011 incident. Like, why the fuck did these nerds got all in their feelings just because she allowed herself to be  filmed fucking her bandmates (expect for the bassist, poor dude)?  Niggas  were  forreal destroying all types of Hirano DVDs and CDs out of rage.  Hell, folks were even destroying their Haruhi and Konata figurines, burning any Haruhi mangas and light novels, and was boycotting her shit –  all because she had sex unlike those sad, pathetic permavirgins otaku.

And lets be real: All these dudes who were calling her a slut, whore, bitch or whatever sexist bullshit they were saying about her were the same dudes who probably wanted to smash her.

2011 was a wild time in the anime community.

With that said I hope you enjoyed this quick little post.  The next topics of the 30 day anime challenges may be coming out a little slower than normal for I will be in Chicago from Thursday-Sunday for Anime Midwest!  If you see me don’t be scared to say “hi” to me and tell me how much you enjoy my works.  My ego needs to be fed by the minute!