What’s a name?  Obviously, it’s a set word(s) to identify a person, place, or thing.  Some names are linked to a famous brand (Nike, Nordstrom, or  Nintendo for example). Others are associated with a person in your life ( brother, sister, cousin, etc.)  There are names famous throughout the world — regardless of culture, race, etc (Micheal Jackson, Bill Gates, Shigeru Miyamoto).   Depending on the person, whenever we hear their name,  we either react with disgust or with love.   Names are important as they are the basis of who we are as a person.  Some fight to preserve their name in history — even after death.

In episode 2 of the Spring 2018 boxing anime Megalo Box  the Junk Dog Gearless Joe squares off with Megalo Boxing champion Yuri. Before their fight, Yuri requests Joe’s real name, as he states that “I can’t imagine you want a ring name on your tombstone” in which Joe  replies “They don’t make tombstones for stray dogs.” 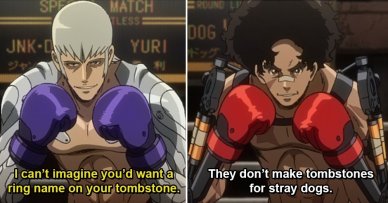 Regardless if Joe wants to use his real or ring name,  he wants his legecy to be known.  He refuses to die without anyone knowing who he was in life.  The line is simple, yet powerful.  Joe is right: they do not make tombstones for no names.

Question: Do we recognize people who never done anything in history?

No, we don’t.    Those who achieved greatness have their names embedded in history.  The ones who don’t are forgotten. The story of the Gearless Joe is one of the classic underdog story.  Joe is a young man of lower class status yearning to escape the strife and trap of poverty through boxing.  With his boxing skills,  he believes that if he becomes the Megalo Boxing champion, his name will live forever.  Joe refuses to die as a nobody.  That’s not his fate in this world.  There’s no glory in being another unknown background character in a world of billions and billions of people.

Nobody gives a shit about a stray dog.

People fight until their final breaths to keep their name and brand relevant.  We may not understand why,  but there are many in this world who do not want to die as a nobody.   Utliziing their skillsets and talents, they put themselves out there in hopes that one day, their legacy will be celebrated. Deep inside them, there’s that drive for certain humans to make their mark on this world by any means.  If they don’t, they will die with the regret of not becoming the icon in their niche or even the world.  That’s why they fight.