August 17th, 2017 marked the 10th anniversary of the hit visual novel series “Umineko no Naku Koro ni”.  Umineko no Naku Koro ni was adapted into a terrible, low rating animated series by Studio Deen in 2009. The manga adaption and the fighting game spin off are better. Seriously, don’t watch the anime.  In reflection and celebration of the series 10th anniversary, I will be providing my raw, unedited thoughts of the anime throughout the month of August.  I hope you’ll enjoy!

WARNING:
Violent, gory images below.   Umineko spoilers below.  If you do not like gory imagery  or want to be spoiled, then please turn back now.  Check out my other Umineko related content on my website such as my utter hatred for Kinzo Ushiromiya  and my shame for enjoying the anime adaption of Umineko.

If you’re still here then that means you’re okay with being spoiled and you’re comfortable with viewing  gory imagery.

How I got into Umineko is funny.  Weird, but funny.  I had just powered through Higurashi no Naku Koro ni Kai and Rei around mid November 2009.  I was addicted.  I needed more When They Cry and Higurashi in my life.  A manga.  A new anime series. A torrent link (don’t pirate kids) to the VN so I could experience this beautiful and deep story  in it’s original,  ham fisted characters design and terrible free licence music form.

I just needed a new When They Cry in my life!

Desperate,  I searched through /jp/ (4chan’s otaku board) for any information on  new and upcoming When They Cry material.  The degenerate weebs of /jp/ were discussing a new entry to the series: Umineko no Naku koro ni (lit. When Seagulls Cry) and its anime adaption by Studio Deen.  They had some rather…not-so-nice opinions on the anime, and were encouraging everyone to stay far away from it.

Yet, I could care less for their opinions! It was a new entry to this excellent saga!

I hit up YouTube to see if any episodes of Umineko were uploaded.  To my excitement, there were some episodes up! Just that they were only in Japanese, as the subs weren’t up on YouTube at the time.  I was never smart enough to download a torrent for the subs, so I gave up. (again kids don’t pirate).

Disappointed, I turned to the image-board Danbooru.  I figured that I could get some minor information on the characters through fanart and fan comics.  A quick search of the title lead me to some interesting fanart and 4koma four panel by the artist Rifyu.

I randomly selected one of his artwork; a crossover of the Umineko and Higurashi cast.  The art was crude and simple,  but it wasn’t too bad (and it was a hella better than Ryukishi’s art for the Higurashi visual novel).  Based on this art, I assumed that that the characters of Higurashi might appear  in Umineko, or at the very least Umineko was an expansion to Higurashi’s story.

I continue to scroll through his comics when I came across a 4koma of a gothic lolita cat-like girl who I presumed was Higurashi’s Rika, and a redhead schoolgirl at a bowling alley.  The redhead made a successful strike and is at all cheers.  Interesting, the word “strike” was in red.   The gothic lolita doesn’t seem too  impressed.  Not by the efforts of her “friend” (ha ha ha), but by her usage of “red text”.

“Why is ‘strike’ is in red and why is Rika upset about her using this ‘red text’?” I questioned.   I was confused by this “red text”.  Was it something special for those two or anything?

The third panel focused on Gothic Lolita Rika throwing her ball in what I guessed was an attempt to one-up the redhead girl.  Gothic Lolita Rika not only earned herself a strike, she also destroyed the bowling alley, and possibly killed a few people in panel 4.

“So I guess Rika is a jealous bitch in Umineko who feels the need to outshine people.” I assumed.  I went on to read another 4koma, this time featuring  a blue hair girl name Erika – a girl with bad fashion taste.

“Erika, huh?  Is she like another Rika because of their names?”  I questioned, thinking there were a connection between the two.

From reading the Erika centered 4koma, I took a wild guess that she had a hardcore crush on Ange’s brother, Battler.  I mean yea, having a cute little crush is cool, but Erika was taking her crush way too far.   Creepy-stalker-with-a-crush levels of too far.  She will sexually harass you too far.  Erika is totally the type of girl you put a restraining order on because she doesn’t know what personal space means. And she might kill you in your sleep.

“Ya know, maybe this is why Ange is overprotected and super close with Battler in some of the 4komas. The women who are attracted to him are crazy.”

Not only was she a bit too protective of Battler in these comics, she might have been like him a bit wee too close as siblings. There were two other 4komas of Battler chilling with different women: Beatrice and Gertrude.  In these comics, Battle is on a date with either woman but suddenly Ange burst in and blocks any attempt of the Beatrice/Gerrude growing close with Battler.

“So, does Ange has a brother complex like she Lachesis off Fire Emblem 4?  Is she one of them fujoshi wotaku nerds that take their otaku hobbies and fantasies too far and want to get with her brother like some weird anime character?  Ange got some issues.”

(Man, she has issues indeed but I won’t go over them in this post.)

I spent the entire night reading through Riyfu’s comics of Umineko.  They were funny as fuck and gave me a nice insight of the series and characters.

“Man, Umineko is nothing like Higurashi! I hope the anime is light-heart and funny as these comics!” I foolishly told myself. 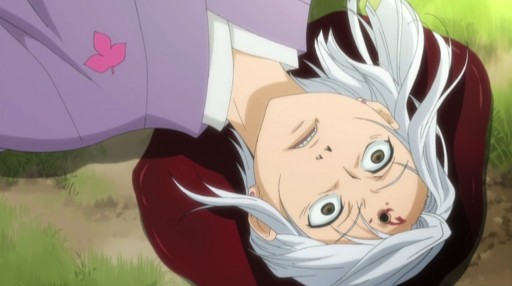 AFTERWORD:
My bad for waiting until two days after the anniversary to post this work was kicking my ass and I didn’t have the energy or drive to work on this freewrite Thursday.   I am working on Part 3 of my Higurashi raw thoughts if you’re looking forward to that!