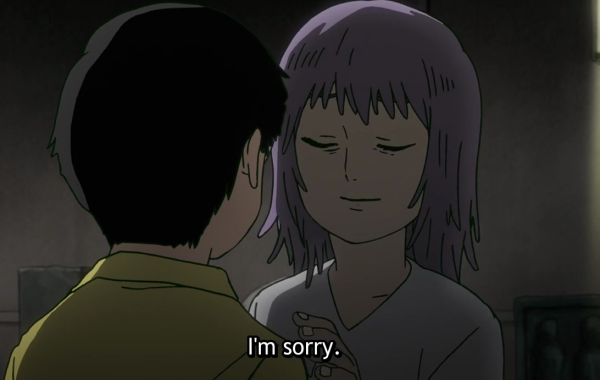 Mob Psycho 100 II: Sparing The Enemy From The Guillotine

WARNING: Contains minor spoilers for the manga version of episode 5 of Mob Psycho 100

As I watched the end of Mob Psycho 100 II episode 5, I was reminded of Robert Greene’s controversial book The 48 Laws of Power.  To be specified, it reminded me Law 2 “Never Put Too Much Trust in Friends.  Learn How to Use Enemies”.  Mob wasn’t trying to use his enemy, the class bully Minori for anything; there was no need to.   It’s the fact that Mob saved and spared her life, despite Minori’s cruel and sadistic bullying of Mob for six months. 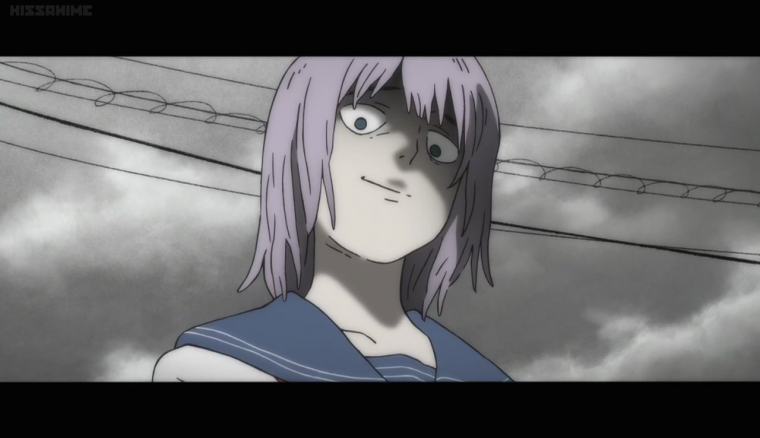 Yes, she was possessed by the evil spirit Mogami. Under his influence she hurt Mob. She tortured him.  Made him feel lowly about himself. Now however, before she was targeted by Mogami, Minori spent her life bullying others. She loved belittling her peers who didn’t share her high social status. She found it thrilling to humiliate those who can’t defend themselves.  That said, bullying (Mob) wasn’t anything new to her; it was her nature.  Mogami wanted to show Mob that people like Minori deserved to die. He wanted to show that Mob would have been in the right if he killed her.

But, Mob believed that Minori could change if her life was spared.

It’s mentioned in Law 2 that those who have enemies never expect anything from them (besides revenge).  When a man is spared from the guillotine from his enemy, he’ll become forever grateful towards that man; doing anything within his power to please them. Thanks to, or rather because of Mob’s kind and forgiving heart, Minori went on the path of bettering herself – vowing to never bully others again and to be kind to people as thanks.

To say that Minori was grateful (to Mob) is such an understatement – given her past with him.  Remember: Mob lived in a world of despondency created by Minori’s negative feelings, memories, and history of bullying to make him suffer.  Pouring sour milk all over him.  Recording her friends ostracizing Mob.   Threatening to kill the stray cat he was taking care of. Having her underlings beat him up.  Anything that is all hellish to crush and break Mob’s spirit and driven him into a near inescapable depression for six months.

He had every right.
But he chose not to.
Why is that?
Why did Mob spare his enemy and show her mercy?

“When you begin to see that your enemy is suffering, that is the beginning of insight.”
-Thich Nhat Hanh, Buddhist monk

Besides the (obvious) fact that Mob is far too benevolent to murder a human being, let alone someone his own age, he knows that people can change (through positive interactions with others).  He understands why people do horrible things.  It’s not out of the realm of possibility that Mob realized that Minori became a bully because she was fearful that she was going to be rejected and isolated by society.  It’s possible that she was projecting her own fears (of social isolation) unto Mob through bullying (bully the outcast so you won’t become a bullied outcast sorta thing). 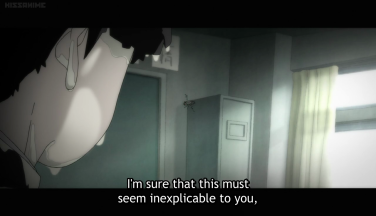 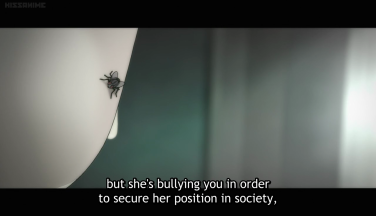 Like Mob, she too was a victim of horrific mistreatment.   Minori was Mogami’s prisoner. The sole, lonely inmate inside a prison crafted from the darkness of her heart.  Mogami wanted to make Minori suffer for her crimes before killing her. Who knows how long Minori was strapped and chained to a bed while Mogami controlled her body.

She was helpless as Mogami used her body as he pleased.

Finally, if Mob would have kill Minori out of cold blood, he would had a worse human than Minoir and Mogami.  Pop her in the mouth for the bully?  That’s okay.  Beat her ass and put her in her place so she would never fuck with him again?  That’s normal.  But to outright murder her would only continue a tragic cycle.

A cycle that Mob had to break. 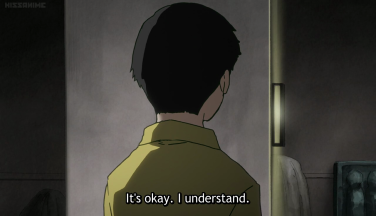 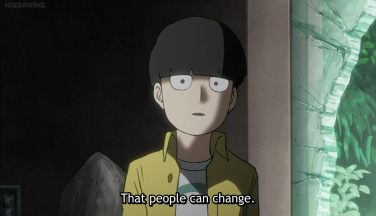 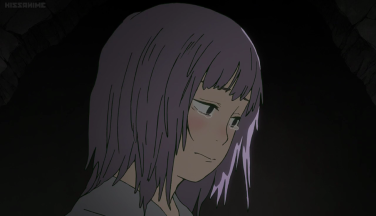 AFTERWORD:
lmfao I know this episode is almost two weeks old and everyone is talking about episode 6, but work has been kicking my ass lately, so I didn’t have time to bang this out on the week of episode 5.
Also, 10/10 episode a lot of great narrative and real life themes in it.

(Also some enemies are beyond forgiveness and you can’t show mercy to them. Crush them totally.  That’s just me being real.)

FREEWRITE: Haruhi Suzumiya and Law 6 of the 48 Laws of Power

‘Law 6: Court Attention at All Cost’

-Robert Greene, author of the 48 Laws of Power 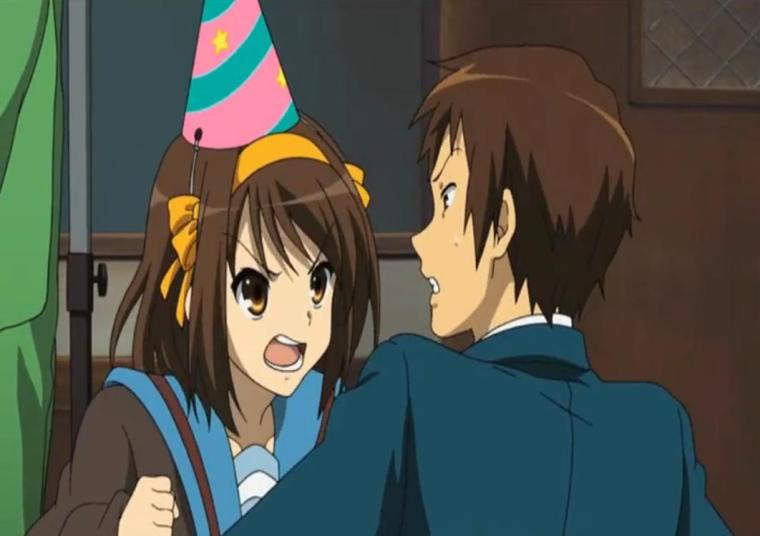 To say that Haruhi Suzumiya (The Melachonholy of Haruhi Suzumiya) is a bit of an attention whore is a grave understatement.  Haruhi lusts for attention.  She demands notability.  She wants all eyes on her like Tupac.  To Haruhi, the world should  and must revolve around only on her. (of course, she’s God after all, so she’s not. She’s not wrong to think that [despite unaware of her godly reality wrapping powers]). Every day, she makes an effort to be noticed, to have people know her name, and who she is.  She doesn’t care if people speak of her in a negative light; it keeps her name circulating. She loves it.

Haruhi  doesn’t want to fade in the background.  She does not want be average, or one of faceless many in the world. Haruhi’s drive is to become extraordinary and different from the rest of the world.  To understand this drive, we must look at her flashback scene from episode 13 of season 1.

‘So I figure I would change myself in middle school. Let the world know that I wasn’t a girl content with sitting around and waiting.’
-Haruhi Suzumiya

As they’re walking home from school, Haruhi tells Kyon the story of her family going a baseball game as a child. Haruhi was amazed at the sight of the overflowing, sold out stadium. She believed that the entire population of   Japan came together at the venue to watch baseball.  When she asked her dad about the number of people in attendance, he told her around 200,000 people. These people, including herself, only made up very small fraction Japan’s population (around 128 million during the show’s original run in 2006).  After returning home from the game,  she did the math, breaking down the attendance , compared it to the entire population of Japan, and discovered that it only made one two-thousandth of the population of Japan.

Haruhi was just one of many. A  drop in the massive and everlasting ocean.

Realizing this, she no longer felt special.  Haruhi was just like everyone else; doing the same shit (brushing her teeth, eating breakfast, going to school, etc.).  Life became boring. What’s life when you’re just like everyone else? Maybe in the world, there was somebody amazing, unique, and extraordinary And yet, it wasn’t her.

At this  revelation,  Haruhi  had to  stand out from the rest of the world. She to get up and demand change by her own will. To  not become content with being average.  She had to make her mark in the world by any means. To court attention at all cost.

‘Be obsessed or be average.’

Later, Haruhi set out to achieve her dream of being noticed and not average. On her first day of high school, she proudly introduces herself and states that she isn’t interested normal humans.  Rather, she wants to meet with time travelers, aliens, and espers. This caused a stir in her homeroom, making people think just who the fuck is this childish girl, and why does she still believe in such things at the age of 15?

Throughout the series, Haruhi attempts (and mostly succeed at) various actions to be noticed.  She devolved a system to change her hairdo by style (she even went as far to wear a different hair ribbion each day).  She stripped down from her school uniform into her gym clothes, not caring if her male peers were watching. She attempted to join every school club, only to dip out from each and forming her own club: The SOS Brigade. She stole the show at her school festival, filling in for a sick guitarist ( revealing that she’s an amazing musician in her own right). All in the name of courting attention.   She places herself at the center of it all, regardless of what others may think.

It’s her world.  She just want all the attention.