Scenario: Let’s say you and another person are deeply in love with each other. You both have unprecedented chemistry. Every little thing that person does never fail to charm you. You can’t help but feel warm and fuzzy around each other.

You guys are inseparable.

One day, however, you’re forced to leave that person – forever.  Your family is moving far away. You got a new job in a new state.  That college you wanted to get into accepted you.  You murdered somebody and now you have to leave your country for another one where your homeland can’t legally remove you from that new country before the police catch you.  How would you tell that person and would you do anything within your power to stay with them – just for one more day?

This is the situation for Akira in episode 3 of Hi Score Girl.

Episode 3 starts with Akira losing to an A.I. controlled M. Bison (Vega in Japan and Dictator in the competitive Street Fighter scene).  Normally, the gaming genius Akira shouldn’t have any problems fighting against M. Bison (as he took him out with only two buttons from a damaged arcade cabinet), but she’s losing her edge. Even if she’s only commutates through body language, Akira is being eerily quiet.

Harou sees this and assumes that she’s upset because summer break is ending; therefore she won’t have time to spend at the arcades. However, he’s ignorant of the fact that her situation is far worse than a mere end to summer vacation.

In a few days, Akira’s family is moving to Los Angeles, California.

The next day, the duo is invited to hang out with their classmates at a local theme park, which both of them take up on the offer.  As the day progress, Akira and Harou decide to ditch them and hang out with each other in the arcade instead. Akira is more than happy to do so, as she wants to spend time with Harou alone.

There’s a part during the arcade scene where Akira spots the light-gun game Space Gun. Harou takes it that she wants to play with her simply nodding yes. He starts to tease her; telling her that she might piss herself because it’s a scary game (given she hates horror-driven media) but she goes with it regardless.

As they play, Harou tries to get Akira to advance the game by having her move her foot off the pedal (as holding down the pedal makes the characters retreat from the enemies).  She refuses. Her leg starts to shake. If she moves her feet off the pedal it’ll only lead her closer to their unavoidable separation.

Akira is desperate for time. Harou doesn’t know it, but Akira has feelings for him.  Remember: Akira spent her young life as the heir to a rich but brutally strict family. Akira was never allowed to enjoy life as opposed to the average girl who could go out and play with friends. It was only recently when Akira decides to defy her family’s wishes and escape to the arcades to get away from her miserable home life.

Flashing, colorful lights blinding the eyes. Furious adults screaming vicious profane words at each other after defeat.  Chocking tobacco smoke poisoning the air.   Such a vile place wouldn’t seem right as a safe haven for Akira. But she needed a safe haven to escape the unwanted responsibilities place upon her.

The safe haven where she met Harou: the boy that brought joy to her life.

Akira and Harou continue their journey through the park; traveling through a magic mirror house, riding a roller coaster and a scary ride.  At one point, Harou asks Akira if her parents ever took her to a theme park, to which she shook her head no in response.

To say that Akira is a sheltered child is an understatement.  To Harou, the trip to the theme park was normal.  Every (normal) child has gone to a theme park at least once in their life. But, to Akira, a girl who never experienced the joy of having a normal childhood; this was a new, life-changing event for her.

I’m sure some of you out there may have been sheltered by your parents and can relate to  Akira. They forbid you to play outside after a certain time.  They didn’t allow peculiar forms of media in the house like anime or rap music.  Anime was a tool of Satan so they banned it from your house. Maybe one day, you had enough of their bullshit and decided to go out into the world and do your own thing, just like Akira.

(Akira’s gonna wind up doing hard drugs and drink straight from vodka bottles later in life. That what usually happens to sheltered kids once they get out in the world.)

The more time she gets to spend with Harou means the more time she can live normally. She doesn’t have to worry about her high status, school work and the pain those things brought her. The pain she never asked for.  Pain that was mended by Harou’s company, understanding, friendliness.  They spent the reminding hours of the day playing until sunset, eventually heading home on a bus with Akira falling asleep and resting her head on Harou’s shoulder.

The sunsets on their summer vacation – and their relationship. 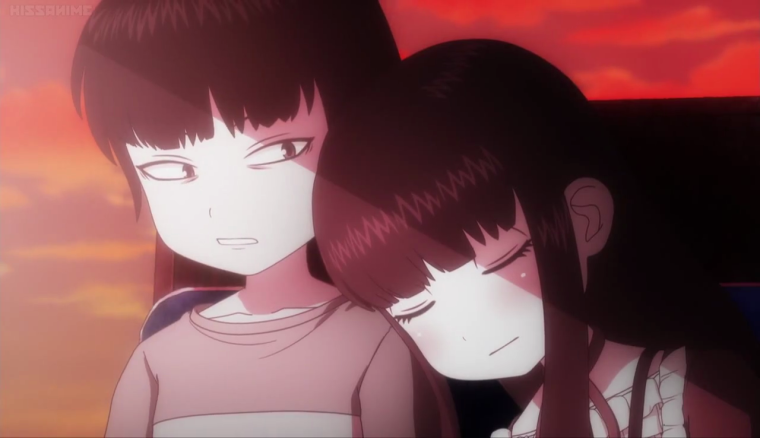 The next day brings in the new school year – and the horrible news. Harou hears about Akira’s family moving away.  He’s shocked.  It hits him – hard. Rumors start to fly such as “her parents got a divorce” or “they got a new job in America.”  Harou refuses to believe he’s hurt about Akira’s sudden move. He tries to play it off by acting happy that his rival is gone. Finally! He can rule his castle (the arcade) in peace; he shouldn’t fear Akira invading it.  She’s gone forever!

Deep down, he knows he’s full of shit.

Akira wasn’t any girl that played video games casually. She was a gifted monster who dominated them.   Any game she touched she mastered it. Only he was able to come “close” to her skill level – but it simply wasn’t enough.  Akira forced yet inspired Harou to improve in Street Fighter II.  She never judged him for his gaming passion but encouraged him to get better at it.

They started out as rivals. He was disgusted at the fact that Akira bested him time and time again. He couldn’t stand the fact she was around. However, as time went on,  they grew as friends.  He respected her.  Harou was happy that she was her equal. In  his time of reflection (and holding back tears) he  became honest with himself:

Harou had feelings for Akira. She touched his heart.

With newfound determination, he runs after her; rushing to the airport to see her one more time.  He arrives in time and tries to convince her to stay (as she’ll miss all these new games coming out such as Fatal Fury by SNK).  Then, he gives her a good-bye present: The toy ring from the first day they hung out together as friends – not rivals. She rushes to him, breaking down crying. She’ll never see her first friend again. 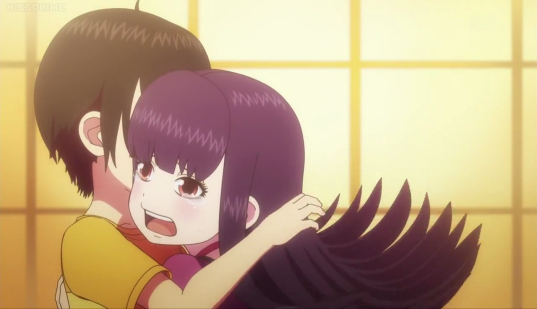 I hate romantic comedy in any form of media – especially in anime; as most romcom anime are unrealistic and littered with cheap, perverted jokes.  From my reviews on My Girlfriend is a Shobitch and Hajimate no Gal, it’s clear I detest this genre. These shows were clearly written by otaku virgins who never had a relationship with the opposite sex and are living out their weird, lonely otaku fantasies through anime.  So, when I discovered that J.C. Staff’s latest project, Hi Score Girl, was not only a (loose) history piece of the second arcade boom in Japan, but a romantic comedy as well, I was I amazed by how they show a realistic portray of a relationship blooming and evolving over time.

May I dare say that this romcom anime has even charmed me by how pure the relationship between main characters Akira and Harou is?  You take two characters who’re seemly “opposite” of each other but somehow,  they click. Akira’s the popular, high-class rich girl who excels in every subject – performance arts included.  She’s the type of girl that every boy in school wants to date and every girl wish to be.  Harou, however, is “hopeless”.  His scholarly performance is a joke. Artistic skills? None. He gets teased often by his peers for his bad grades.  He rather wastes his day ruling over at his castle: the local arcade, installing fear in peasants with his mastery in Street Fighter II: The World Warrior (SF2).

Harou believes that Akira is out of his league.  Can’t blame him for his wrong line of thinking.

Akira, despite her academic achievements and financial background, loves playing video games. In reality, she’s socially awkward, can’t make friends, doesn’t express herself verbally, and hates that her family controls her life. She visits the arcades often to escape her rigid lifestyle,  blow off steam, and be her true self. Funny enough, like Harou, Akira is an SF2 player – except she’s the top player in their scene – as Harou will learn the hard way.

After witnessing  Akira’s 30 win-streak performance against other players in SF2 Harou challenges her.  He loses to her Zangief – badly. To save his pride, Harou defeats Akira by using Guile’s defensive “Turtle” style and “cheap” throws tactics. Akira gets pissed and starts attacking him; it’s the start of their rivalry that will bloom into friendship and eventually, the two having feelings for one another.  During their summer vacation, the two hang out at various arcades, testing their skills against each other and thus deepening their bond.

For Harou, he’s happy he has an equal. For Akira, she’s happy that she finally made a friend.

Right from the start, Hi Score Girl destroys the bullshit idea that opposite attracts we see in romance-based media by having our main characters falling for each other over a mutual interest: competitive video gaming. Let me ask you people who have a mate a question: How did you guys fall for each other?  Surely it wasn’t the fact you guys were opposite of each other. It was because you and your mate had things that click with each other and that turned you on towards them.  Sure, there are some differences, but overall, you were drawn to them through your similarities (and other factors of course).

Social and scholar level wise, Harou and Akira can’t even compare. Akira shouldn’t be hanging around with a “stupid” kid like Harou. Harou shouldn’t have the chance to be with Akira. Still, they were able to overcome those minor differences. They grew close through their powerful love for competitive gaming, relentless desire to win, and mending their after-school loneliness.    Who cares for social status differences when you and your friend vibe over a powerful passion?  What’s good are having excellent grades, popularity, and cash flow when you’re lonely and your parents dictate your life?

Those superficial ideas don’t matter when they’re outweighed by shared attractiveness on a deeper level beyond mere opposites.