This is The Yuki Half-Time Report, sponsored by Crunchyroll!* We’re halfway through Cells At Work with only seven episodes reminding.  How does Cells At Work! stand right now?
Cells at Work is still going strong despite some minor issues I have with its progression. While I do like the show, it’s clear that the show is following a formulated plot guideline: Introduce the monster-of-the-week (bacteria, infection, virus, etc.), break down how they attack the body, let them do their business, good guys defeat them. Done. Next.

I am not a fan of this: it’s boring and a bit played out in my eyes. With episode 6 being set up as a two-parter or story arc where our heroes are facing off against a cancerous cell it seems that the formula is taking a break (for now).

I’m disappointed that the Type A Influenza enemy problem from episode 3 wasn’t resolved in episode 4. This left me wondering what happened and why this was skipped. The writers went to another storyline and I’m not too happy with that  – especially since it was set up as if it was going to be a two-parter episode.  If you’re going to set something up, resolve it,  It looks goofy when you don’t and you got people wondering what happened.

.Cells At Work retains its cute charm which continues to work in synergy with the educational and action sides of the show  The art and animation remain consistent  (although I admit that I’m not trained in spotting animation errors) and there haven’t been any major changes to the art.

Storywise, there hasn’t been any changes to its simple manner. Again, bad guys show up, good guys win.  There are some slice-of-life scenes here and there but nothing to write home about.  Episode 6 featured a flashback story for the first half with how Red Blood Cell-Chan came to life,  got assigned to her job, and meeting White Blood Cell-Kun.  She was a clumsy, goofy, and cheerful in her childhood as she is now as an adult.

With the cancerous cell making its appearance in episode 6 going into episode 7 it appears that the show will be taking a serious, drama-driven approach. My predictions going into the future of the show?  There will be a few character deaths on and off screens from the cancer cells.  Things will be dark and painful but I can’t wait for it.

With that said I hope you enjoy this halftime report. I’ll catch you guys in the next one.

*Legal disclaimer: I am not sponsored by Crunchyroll lmfao I pirate most of their shows. (And there goes any chances of me being sponsored by them ever) 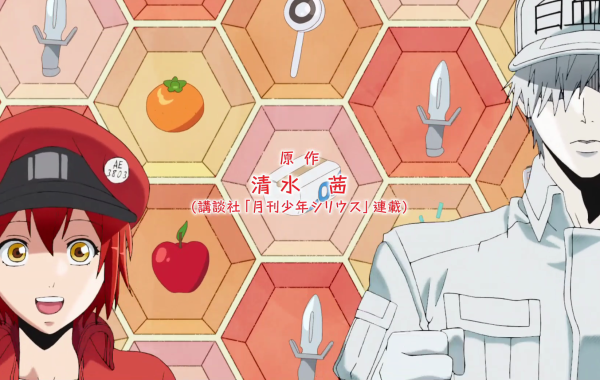 Osmosis Jones, But For Weeaboos (Cells At Work First Impressions)

You’re a science teacher in Japan.  You’re passionate about teaching children about cells and how they work. Yet, your students don’t give a damn about that shit.  They’re some stupid ass, Bebe Kids ass, hopeless ass children who don’t wanna learn anything in life.  No matter how hard you try to make learning interesting, they refuse (to learn).

You decide to fail them all – you have no hope for their future.

You head home after a stressful day of dealing with those dumb ass kids.  You kick back with a can of beer in one hand while having a blunt in another as you watch TV. Bill Nye The Science Guy – an American educational classic showing kids how much science rules – comes on. A smile appears on your drunken, stoned face as you remember how much Bill Nye inspired you to become a science teacher with his down-to-earth, caring, and loving approach to science education.

Bill Nye ends and it’s followed by a classic cult movie: Osmosis Jones – a comedy movie about Ozzy, a disgraced white blood cell cop who, with the help of his partner Drix, defends the sickly body of some depressed zookeeper with unhealthy grief coping skills. After watching both the movie and Bill Nye you get inspired to come up with your own manga series to entertain children while also valuing their education by teaching them about cells and the human body.  You down another beer, roll up another blunt, and relentlessly get to work on this new project for the next few months.

You retain the White Blood Cell character from Osmosis Jones; making him a stoic killer of germs instead of a street-smart cop. Drix? You replaced him with a cute yet clumsy girl, giving her the role of a red blood cell. As you brainstorm ideas for different cells, you come up with cool designs that will appeal to both children and adults.  The children of Japan need this. It may be too late for your slow ass students to learn anything but future children will appreciate your efforts. Once you finish the first draft you pitch it to Kodansha.

Over time, this manga becomes a sleeper hit – mostly because you made the Red Blood Cell a waifu character that everyone will look up ero doujins of her getting a train ran on her  by the Killer T cells troops along with Macrophage-Chan – but because of how innovating your manga was in terms of teaching people about how cells work.  And that’s how Cells At Work became to be.

Trust me: My father’s brother’s nephew’s cousin’s former roommate used to be drinking buddies with Akane Shimzu and he told me this on the phone last night.

Bullshit aside, I’m impressed by Cells At Work.  It’s secretly adorable and I admire how the creative forces behind it use Shounen style action to sell its educational value to fans. Furthermore, the roles of the cells and how they interact with each other are explained in a down-to-earth manner. If you’re a complete idiot like when it comes to science, you won’t be lost, confused, or feeling even dumber than you already are.

(And trust me: You’re probably just as dumb as I am thanks to the American education system.)

Cells At Work is a  simple anime (which is good because it doesn’t need to be complex or deep for the show to share its message).   Each episode, there’s a situation with the human’s body is attacked by a variety of ailments such as basic germs attacking the city in episode one,  an invading army of infections in episode two, and the world battling against invasive bacteria in episode 3.  They win of course, but in that classic rule of three (episodes) style, they get fucked up and ROFLstomp by the series’ first major enemy. In this case, it’s Type A Influenza.

Granted, the heroes will win through some asspull bullshit by episode four.

Main character Red Blood Cell-chan (RBC-Chan) is a clumsy girl trying her best on her first day at her new delivery job.  During a delivery run, she (along with the citizens of the “world” of the human body) are attacked by monsters – germs attacking the body. They’re about to be killed when supporting hero White Blood Cell comes to save them by mercilessly butchering and slaughtering the germs with combat knives.

As with any Shounen series, Cells At Work uses violent action to keep fans engaged.  We are first hinted at this fact during the OP; which features a squad of White Blood Cells, armed with knives, hunting down a germ. This is followed up by an elegant maid walking around gracefully in a flower field…and she’s carrying a giant ax while her hands and face are covered in blood.

What makes Cells At Work works (besides the violence) is the usage of implanting classic anime tropes and personality with each cell. The Killer T Cells are personified as merciless, battle harden combat vets, the  Helper T cell becomes a military commander,  Macrophage cells are portrayed as elegant, classy maids who like to chop up their victims with their giant axes and blades.

Do you remember those educational “entertaining” science films back in school?  You know what I mean – they’re cheesy, boring, trying too hard to have style but it’s so dry.  Cells At Work throws that shit away while still retaining the knowledge.  Knowledge at a simple level but still knowledge regardless.  That’s why famous personalities – may they be fictional or not, such as Bill Nye, Carl Sagen, Miss Frizzle, and Ozzy (Ozzy and Drix) are beloved.  They taught us the knowledge of science through their unique personalities. Of course, I’m not saying you’re going to get layered, in-depth personalities for each character compared to story-driven anime series such as Durarara or Monogatari  but when you’re selling an anime centered around science and the human body you better make it entertaining.

As of this writing, I’m caught up to  episode four  (somehow that Influenza enemy thing didn’t get resolved) of the anime and from my positive reaction, I’m going to stick around with the anime until either the series end or something utter bullshit makes me turn away from it.  While I do believe it’s going to be one of the best shows of the seasons, I can’t confidently say it’s anime of the year material but we will see once the series end.

If you’re looking for a different anime series that still share the familiar style of your shounen shows while also learning why you should take care of your body and the cells in it, then Cells At Work is right for you. If not, you’re the reason why the education system is such a failure today.

(Before I go, Let me go on record that Red Blod Cell-Chan and White Blood Cell are those two co-workers that you know have a thing for each other and they’re gonna get caught fucking in the employee bathroom by the janitor when they thought everyone left the office building that night)