“Queen Rei” is the perfect title for Rei. Throughout episode 8 of the Doom Tree arc (The Festival is For Me?! Queen Rei Sings With Passion), she earns her queenly title through her musician passion and bossy attitude.  Using her title and pull, she uses her school’s festival  to produce and direct her own concert.  It’s all about her. Despite […]

“Queen Rei” is the perfect title for Rei. Throughout episode 8 of the Doom Tree arc (The Festival is For Me?! Queen Rei Sings With Passion), she earns her queenly title through her musician passion and bossy attitude.  Using her title and pull, she uses her school’s festival  to produce and direct her own concert.  It’s all about her. Despite her seemly effortless drive, in reality, she struggled.  A struggle she hides with boastful bragging. 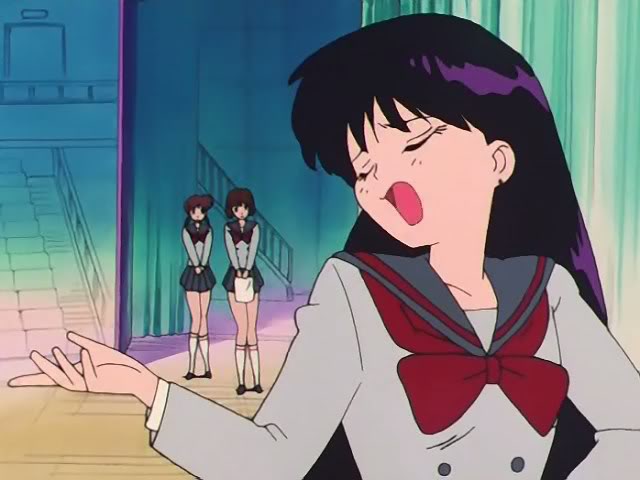 In the beginning of the episode, we see the queen doing what she does best: being a boss.  She demands order and productivity; snapping on underclassmen for idling around.  She yells at another student worker for leaving audio gear lying around.  She is pissed by the incorrect stage lighting during her rehearsal.   Frustrated, Rei tells everyone to break.

During her break, Rei boasts of her hard work to friends Usagi and Ami (whom were watching her rehearsal). She proudly admits to taking advantage of her status of head executive committee of the student council; using it to promote her concert and music.  Music that she produced herself. 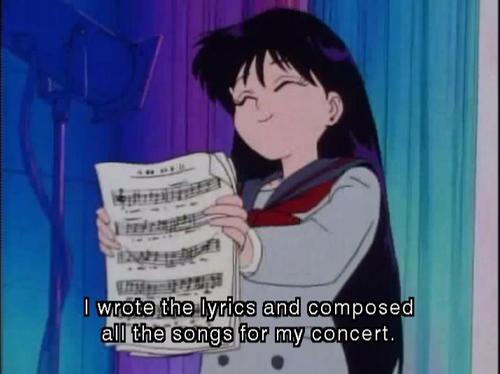 Queen Rei truly earned that title. She’s like Beyonce or Janet Jackson even.  Some may not agree with Rei’s attitude and directing style however.

Later, the queen and her circle regrouped at Hikawa Shrine, discussing on the festival and her concert.  Ami remarks at Rei’s hard work. She assumed that it took Rei many hours to produce  music.  Rei gloats again, telling the  nerd that her own natural talent made the work effortless.

Yet, Rei’s inner thoughts tell an opposite story.  She struggled.

Her frustration spoke as she slam her hands down the keyboard. She snatches early drafts of her music off the piano, tossing it in trash. Finally, Rei lays her head down, holding back tears. The young girl feels defeated. Defeated, and disappointed.

‘I should give up. It’s not worth it anymore.  Nobody will like this.’

I can imagine her thinking such these things.  Her early prideful talk was a cover for her insecurities and struggles.  Nevertheless, she managed to overcome the insecurities, producing music that she’s proud of.

The episode transitions to concert day.    Rei is warmly greeted with cheers from peers and friends alike. She thanks her fans and introduces herself in third person, referring herself as “Rei-Chan”. She gotta feed her ego like like another great artist, Kanye West.

Rei starts performing.  Everything is all well. All well until resident alien fuckboy Ail does his usual Cardian summoning.   The Cardian of the week: Seiren. 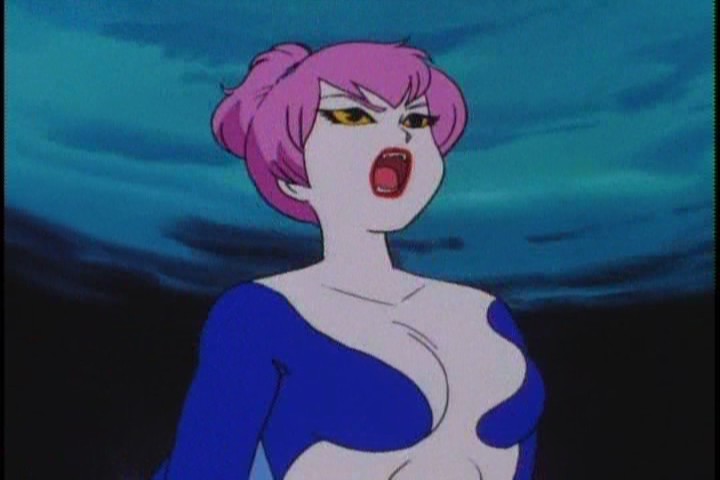 The Sailor Scouts do their usual  “attack the bad guy” routine, only to fail once again.   Rei transform into Mars, talk shit about how the monster ruined her concert, harmed her fans, and vows to end the threat.  Mars attack Seiren, setting her on fire, but the monster puts her out with her water magic.

All hope seems lost until Moonlight Knight appears; offering his weekly self-help guru bullshit motivation  advice (with the week’s topic being on a beautiful melody at the soundless part of the universe and requests Mars to sing that melody for him one day). Moonlight Knight launches at Seiren, whom dodges his attack, and knocks over Mars’s music, destroying it.

(Thanks Moonlight Knight! You ruined everything yet again.)

Mars is saddened and pissed.  Hours of her dedication, love, passion, overcoming self-doubts, and her achievement: destroyed.  This wasn’t just some random, untalented asshole or hater talking shit about her works; somebody ruined her hard work. 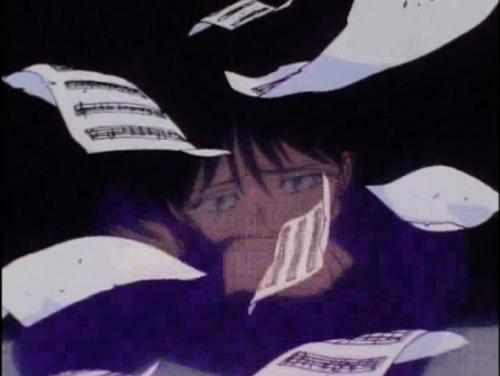 It’s like if somebody snatched your art or notebook out of your hands Tearing pages out from it in front of your face.  All of your passion and dedication into your craft is in ruins. 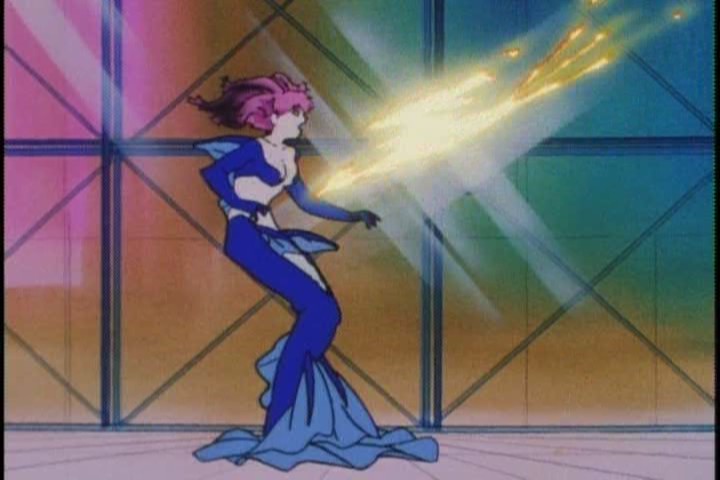 Mars’s anger brought forth a new power: Fire Soul Bird.  With the new power and her rage, Mars attacks Seiren with furious anger…which her firely passion only disabled the monster just  so Sailor Moon can get the kill.

Because Sailor Moon must always wins. Just like 2010 John Cena. 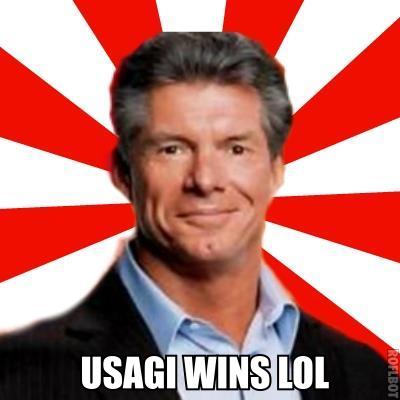 After defeating Seiren,  Queen Rei (or Rei-Chan)  resumed her concert (which nobody seems to question why they let her continued it  after the monster attack).  She steals Moonlight Knight’s inspirational line about a star singing in a soundless universe (all great artists gotta steal at least a few things), and closes her concert out with  a cheesy sounding 90s  love song in which I could not give two fucks about.

Rei is truly a passionate queen.  From between her bossing folks around and pouring her soul into her music, Rei shines and she lets her shine be noticed.  As queen, we see that she has influences and is quite bossy on the stage.  With her passion, we see her pride, joy, and overcoming insecurities  with her music (even if she did hide the insecurties from her friends).

Rei is truly the queen. 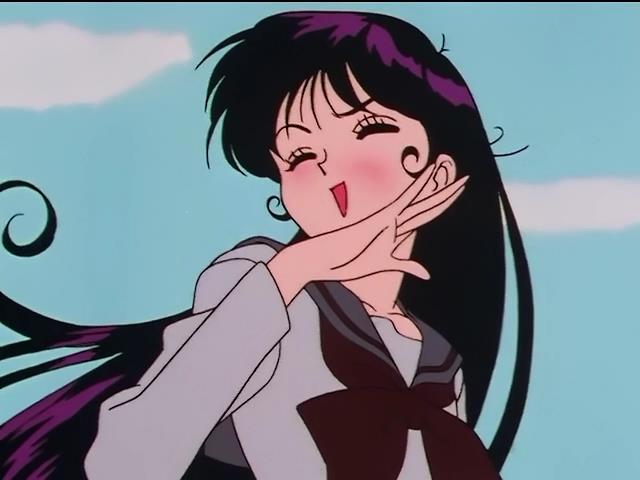