Backside of Our Desires (Freewrite)

Recently I started reading Relentless: From Good, To Great,  To Unstoppable by Tim Grover (athletic trainer for iconic basketball players such as Michael Jordan and Kobe Bryant) after months of the book sitting on my dresser.  Skimming through the table of contents I found a chapter that took my attention.  The chapter: “When You’re a Cleaner… …You Have a Dark Side That Refuses to be Good”.  I went straight to that chapter (as I  know I have a dark side and comfortable with that), yearning to understand why it’s okay to have one.

The chapter opens up with Tim saying this: ‘A cooler tries to fight his dark side and loses.  A closer acknowledges his dark side but isn’t able to control it.  A cleaner harnesses his dark side into raw, controlled power.’  While I simply nodded and smile (a twisted smile at that), I started to laugh a bit. ‘What kinda Persona 2, 4, and 5 type shit is this?’ I asked myself.  I mean, I doubt Tim Grover is a gamer nor does he gives a fuck about video games, but I couldn’t help to think about the Persona series when reading the chapter.  In Persona 2, 4, and 5, you encounter the “Shadow Self” of the heroes. 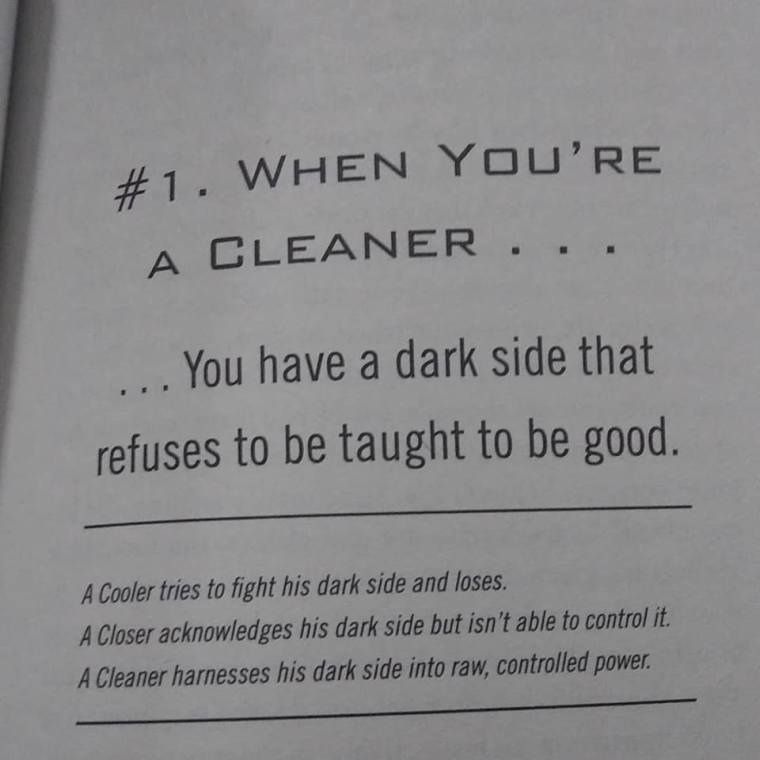 Simply put, the Shadow Self is the “corrupted’ version of a character. It is their hidden desires and thoughts they do not want the world to see.  Domination.  Revenge.  Anger.  Jealously. Lust.  Pride. Hatred.  You name it.  It is the character true self. Yukiko (Persona 4) secretly wants to be liberated from her duties as heir of her family’s business.  That’s her true self.  Maya’s (Persona 2) anger towards her childhood friends.  That’s how she actually feels about the situation that happened to her (as a child).  There’s nothing wrong with them.  It’s just their repressed feelings they have yet to deal with.    We felt those dark feelings often and there’s nothing wrong with it. What’s wrong is if we let those feelings control us – not the other way around (or worse, if we try to fight them).

It is said that if anyone tries to deny their shadow self in the Shadow world, their shadow will become enraged and kill the person.  In short, they’re coolers. Adachi (Persona 4) knew he had a dark side and rather than control it, the darkness in his heart lead to the murders of two innocent women (and it almost caused the destruction of the world).  He’s a closer.   Yukiko however, came to terms to her dark desires and understood those feelings shouldn’t be demonized.   Because Yukiko accepted her dark feelings (rather than denying them) , her shadow manifested into raw, controlled power (her Persona) – which she would use to save the world with her friends.

Yukiko is a cleaner.

Be real with yourself and don’t bullshit me: You have dark desires that you don’t want the world to know.  It’s oaky.  Those desires do not make you a horrible human being (as long as they’re not unethical, illegal, etc.).  You want power and control?  That’s okay.  So do I and many other people in this world.  You wish to dominate in your niche and be the baddest man or woman in it?  Same here man.  Had wrong doings against you or those you love and you want the people responsible to suffer for it?

Since I’m on that topic, let’s take Futaba (Persona 5) for example.  Her Shadow self was rooted in her desire to confirm that her mother was murdered (rather than committing suicide as originally reported).  Futaba lusted for revenge against the people who murdered her mom.  Futaba was going to kill herself (over the grief and stress of losing her mom) until her shadow talked her out of it and  told her that she has friends who love and support her.   How could Futaba get revenge against the people who killed her mom if she had offed herself?  Upon accepting her true feelings of wanting revenge Futaba became a cleaner.

Now, do you see how there’s nothing wrong with having a dark side? A shadow?  Your shadow self should be used as a positive.

You were used! They forged her suicide note nad laid the blame of her death upon you! They trampled all over your young heart!  Get mad! Don’t forgive those rotten adults!”

NOTES:
Coolers: Your average guys.  They get job done at a simple, everyman level.  Your 9-to-5ers basically.
Closers: Those who go up and beyond just a little bit.  They may do a little bit extra than the average guy, but won’t go far when face with issues that they can’t handle

Closers: Your top/god tier men and women.  They do not fear pressure, advisesity, or problems.  In fact, they love them.  They are willing and able to dominate in any situation even if the situation is filled with problems without error.

The Prince (Or What In The Hell is This)

Soo…I’m currently “The Prince” by Machiavelli and I am utterly confused by it.  Was this dude a psychopath? Am I suppose to deeply analysis his ideas and interpret them in a special style.  Cuz this dude is confusing and he was clearly fucked up in the head.

Don’t get me wrong, this is a good book and it making me interested in politics and power, but there’s a good reason a Dark Triad was named after him