25 Days of Blogging Day 1: The Type of Isekai I Want To See

25 Days of Blogging: It’s like the 25 Days of Christmas, but without the cheesiness, horrible family members,  and holiday depression.  If you know me, then you know thatI can’t stand isekai anime.  I hate the concept of a main character (or M.C.) gifted with immerse, god-like powers after being transported into a new world without working their ass off […]

25 Days of Blogging: It’s like the 25 Days of Christmas, but without the cheesiness, horrible family members,  and holiday depression.

If you know me, then you know thatI can’t stand isekai anime.  I hate the concept of a main character (or M.C.) gifted with immerse, god-like powers after being transported into a new world without working their ass off (to gain those powers).  The idea is tired, corny, goofy, and I don’t get nor understand why weeaboos enjoy that shit.

Well, I lied. I do understand why.  Isekai fanboys (and most anime fanboys) live horrible, bland, and uninspiring lives.  In the real world, they’re not shit. Nobody likes them. Nobody knows who they are. They will never be anything in life. They need (isekai) anime as a means to live vicariously through their fictional heroes’ adventures – it’s their only joy. Of course, once the isekai trend dies out, these nerds will wind up committing suicide because they will nothing to live for. Urano, the star of Ascendance of a Bookworm, was a young Japanese college woman who loved nothing more but sticking her nose behind as many books as possible. Her life dream was to travel the world’s largest libraries and document her findings of rare books held in these libraries. Urano was one step closer to achieving her dream (by obtaining her librarian certification) until she was killed in an earthquake (crushed to death by her massive collections of books). Near death, Urano prayed to God that in her next life that she would be able to continue her lifework.

Answering her prayers, God transported into a world full of books – but only for the wealthy elites.

Urano, now a sickly five-year-old white girl named Myne, has been reborn in the medieval ages.  She wakes in her new world to a disturbing discovery: there are no books. Worse, she doesn’t see anything that indicates a writing system. Myne starts to panic and break down.  Myne’s new mother walks into her room and asks her what’s wrong, in which Myne asks her if there’s any books around.

Myne’s new mom laughs at her and makes her upset.
She’s such a loving mother. 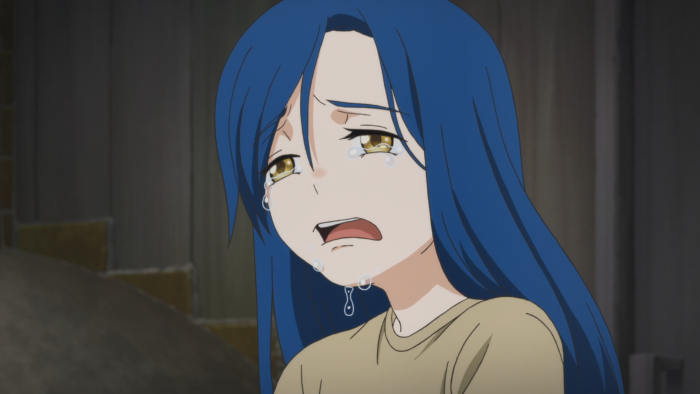 Myne would later discover that books do exist in this new world, but only for those who can afford them (as her dad puts it: buying a book for her would cost the family’s entire income for the year).  Copying books is also an issue that she would also come to understand, as they must be copied by hand ; costing as much money as buying a new book. Despite these setbacks, Myne is determine to  not only read, but to learn the  new writing system of her world so she can create books for the commoners of the world.

She doesn’t want the rich elites to have the joy of reading alone.

I admire Myne’s willpower and drive.  Rather than to bitch about her current situation, she seeks out solutions for her problems; even if it means pushing her sickly body to its limits to yield desired results.  While most isekai heroes are given unbelievable god-like powers in their new world to make living in that world easy, she is given nothing more but her raw imagination, wits, and determination. Hell, the girl she was reborn into almost died from a nasty fever. Her doctors told her parents that it would be a miracle that she lived. Worse, Myne lives in a world where many children don’t live past the age of seven – and Myne is five years old.

To say that the odds are stacked against her is a clear understatement.   But, that’s life.  There always will be certain odds stacked against you. You don’t ask nor beg for greatest.  Nobody is born with it.  You have to work your ass off year-after-year for greatness.  Myne’s on the path of working towards greatness (even if she might have a mana cheat code built into her, but that’s for another blog post).

Protagonist Naofumi is summoned into another world with three other young men from parallel universes to become Cardinal Heroes. While the other heroes are given offensive weapons and support from the people of the kingdom, Naofumi is given a shield. He also has no public support: as he’s falsely accused of raping the kingdom princess,   Bitch a.k.a Slut (who was once his sole supporter before robbing him of his gear and accusing him of rape).  Throughout the series, the cynical Naofumi must learn how to trust others; as well as work with the shield class’s limitations to not only become a legendary hero, but to clear his name.

Again, like Myne (cool nice Myne not Bitch a.k.a Slut’s fake name), Naofumi is an isekai hero who isn’t overpowered nor was blessed with anything special. He must work his ass off in order to get what he  wants in his new world – even if it means playing dirty. He has to gain the public trust and prove his worth to a world that wants him humiliated and dead.

I want to see more and more isekai anime where main characters have all the odds stacked against them.  They don’t need any special superpower that makes him top or god-tier from the jump  I want to see the M.C. forced to adapt to his new world and be forced to work his ass off to get what he wants.

I wanna see an isekai where the MC is a lame ass cornball ass goofy ass dude who has no luck with women.  He gets mocked for his horrible taste in fashion. Nobody wants to fuck with him due to his low social standing.  He dies in an accident and while he’s dying, he makes a wish that in his next life, he’s reborn into a man that’s fly. A man that all the women want. A man that has high social status.

And he gets that wish.
But, he has to work for want he wants.

In this new world, he is still the lame ass cornball ass goofy ass man that no woman wants.  After living in this world with anger and bitterness towards it, he realizes the only way he can get what he wants is to put forth the work. First, he figures out a way to make a lot of money through learning new skills through different trades.  Once he gets the money, he gets the power. Money + Power = High social status and respect.  High social status and respect = women (Yes, that was a Scarface reference).

Do you know how many male otaku isekai loving idiots would get inspired by an isekai anime like that? Do you know how many of them would want to be like that guy in the made-up isekai anime I just broke down that I know somebody will steal from me, turn into a light novel that will be adapted into an successful anime and never give me credit for it? Jokes aside, that’s the isekai we need in the world.

Stop with this power fantasy shit in iskeai.
It’s getting old.

-Until next time,
Yuki The Snowman.