I’ve been looking forward to Days 5 and 6  of this list. I love music.  I love anime.  This will be a challenge indeed. There are far too many endings songs I love that I can not possibly just choose one as my favorite.  I’m going to do ten songs, five opening and five ending themes for each day and […]

I’ve been looking forward to Days 5 and 6  of this list. I love music.  I love anime.  This will be a challenge indeed. There are far too many endings songs I love that I can not possibly just choose one as my favorite.  I’m going to do ten songs, five opening and five ending themes for each day and let you in on why I love them so much.

5.An Evil Angel and a Righteous Devil
Dragon Ball Super ED 8
Performed by The Collectors

With the Tournament of Power Arc introducing a new ending theme this week (Haruka by Lacco’s Tower), I thought it would be a great idea to start off this list with the Arc’s first ending theme.  An Evil Angel and a Righteous Devil is my personal favorite of the Dragon Ball Super ending themes due to the political tone and themes of the lyrics and music video (choosing a side, deception,  the tragedy of war, etc.), something I  would never expect from a Shonen series such as Dragon Ball.

I’ve already given an in-depth analysis on the song  in an earlier post, so please check out the link provided.

‘Angels and devils: even if the devils were really angels
Righteousness and evil would still hold no meaning
Winning or losing doesn’t benefit anyone –
Everyone is simply hurt, crying at the end’ 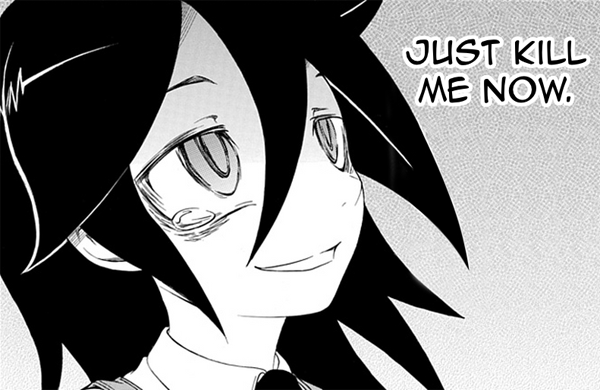 Great  songs are the ones that are personal.  It’s even better if find parallels in the lyrics to your own life  or if the performance of the song matches the spirit of the song’s central theme.   The first ending theme of   “Watamote” captures this as voice actress Izumi Kitta’s  performs  as Tomoko the series socially awkward main character I coudn’t help but find a sense of similarity by   listening to Tomoko sing about her  inability to commute with “normies”, wasting her life online, and her loneliness.

I also couldn’t help but laugh as in reflection of my old  days of being a shut-in weeaboo back in middle and high school – feeling superior to my normie peers.

…god i was such a special snowflake trash back in the day.

‘After all the time I’ve spent online
My voice won’t even come out after all this time
In rain or shine, it doesn’t change
Is that right?! It’s not my fault!’

‘This serene feeling…
Tell me, what’s the word people use for it?’

“This serene feeling”.   It’s the feeling I had towards  Hiru no Tsuki ever since I was a child watching Outlaw Star.  Despite being ignorant to the Japanese language and the context of Hiru no Tsuki  back then,  I always felt this peaceful, yet sorrowful presence in Akino’s performance and in the song itself.  11-year-old Benjamin couldn’t quite tell exactly  what or why the reason  for the feeling back then but he knew that there was more to Outlaw Star than just the simple story of  ragtag crew traveling through space finding treasure and collecting money.

Hiru no Tsuki fueled the feeling.

Emily Brown and Ayako Kawasumi’s  (American and Japanese voice actresses of Melfina) performance of Hiru no Tsuki in Episode 21 (Grave of the Dragon) drove the sorrowful emotion point home with Melfina singing acapella – possibly reflecting on her longing to understand the purpose and reason on why does she exist; despite her artificial creation.

The pain in her heart.

‘Will the time come? When you will know the pain in my heart?
Then you’d be able to be gentler than you are now.’

Ride on Shooting Star doesn’t make sense.  You can not make sense of it, no matter how much you want it to.  It’s confusing. It’s crazy.  It’s nonsense.  It’s perfect for FLCL!

Think about it: Fooly Cooly is a crazy and outlandish anime series.  You know what else is crazy and confusing?  Puberty – and the changes that it brings.  Unexplained changes and experiences you did not  understand at all as a teenager.  What’s one of Fooly Cooly’s creative themes?  Dealing with puberty and not knowing how to deal with it.  That’s why Ride on Shooting Star is perfect as the series’s ending theme.   It doesn’t need to make sense and that’s why it’s perfect.

‘Ride on shooting star
With the voice of my heart, like a shotgun
I kept on singing’

‘THE REAL FOLK BLUES
I just want to know real sadness
Sitting in the muddy river, this life isn’t so bad either
If it ends once.’

The lyrical music of Cowboy Bebop is of  an expansion of the series’s story beyond simple background atmosphere.  Cowboy Bebop is heavily influences by music so it shouldn’t be a shock  how the music in the series work in synergy  for the narrtive  of Cowboy Bebop with songs such as “Rain”,  “Blue”, and  ending theme song “The Real Folk Blues”.

Spike’s tale is that of a depressing, saddening one.  While there are many things about Spike and his past that we may never know, we do know and are aware of the sad realities of it. One could consider The Real Folk Blues  as additional information on Spike,  with lines in the song such as “The despair that grew out of hope
And this chance with a trap laid in it “ and  “How long must I live to be healed?”.

Well, I hope you’ve enjoyed my top five anime ending themes!   What are some of your favorites?  Please tell me in the comments below and see ya later!