Eh.  I’m a man who doesn’t get himself in drama (although I sure love watching and knowing about it cause I’m nosy), so I don’t watch drama anime.  I’m also not big on romantic anime; I find them to be boring.  So instead, I’m going to focus on my favorite romantic episode: Hitagi and Araragi’s date (Bakemonogatari Ep. 12) Despite […]

Eh.  I’m a man who doesn’t get himself in drama (although I sure love watching and knowing about it cause I’m nosy), so I don’t watch drama anime.  I’m also not big on romantic anime; I find them to be boring.  So instead, I’m going to focus on my favorite romantic episode: Hitagi and Araragi’s date (Bakemonogatari Ep. 12)

Despite my dislike for romantic scenes, Hitagi and Araragi’s romance feels real.  They’ve grown as not only characters, but as close friends. Romantic partners even.  This episode provides us with an insight on the more softer, delicate side of Hitagi.  She learns to opening herself and trusting others – things that she has difficulty with due to her rape trauma and her mother’s betrayal.  In this episode, we  do not just see Hitagi  as the harsh, blunt tsundere, but rather, a young girl,  finally happy with her life.

Happy to fall in love with someone whom she can open her heart to.

The episode starts with Hitagi and Araragi joyfully having lunch.  Hitagi declares that they’ll go on a date after, to the surprise of Araragi.  Confused, Araragi doesn’t know how to process this unexpected event.  Rather than to respond, he stuffs his face with food.  Hitagi sees this as that she may have been forceful, so she rephrases her date request as a question.

She tries various methods of the question, but  Araragi continues eating, ignoring her.  Confused by the silence, Hitagi asks him if he doesn’t want to go on a date. He replies with that he wants to.  Pleased,  Hitagi crafts up the plan for their date.  Araragi seems pleased too, as he was just “ignoring” her initial request to see how she would react. 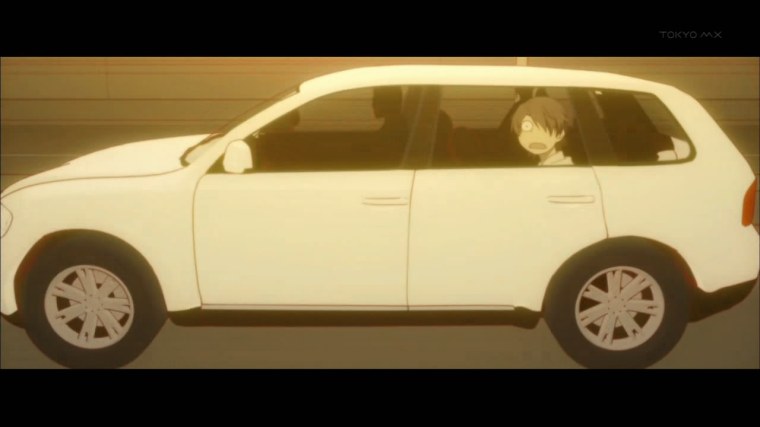 Later that night, the two are picked up by Hitagi’s pops (who drives them to their date spot).  During the ride, Araragi appears nervous (naturally, he’s in the same with  his girlfriend’s father).  Hitagi gets on his case, asking why he’s nervous, if he loves her and why.   Mind you, she’s doing this in front of her dad, so She’s  putting  him on the spot –  but it works.  Her interrogation turns into a lovely, lively chat between herself and Arargi.

After a few minutes, they arrive at a natural park – the location of their date. Hitagi gets out and walks towards an unseen spot, but not before suggesting Araragi to talk with her dad.  Araargi gets nervous at the idea.

Her father decides to break the ice with gentle teasing; jokingly asking Araargi to take care of his daughter.  After that, he states that it’s been so long since he saw Hitagi so happy and carefree. He expresses his regrets for not being there for Hitagi after her sexual assault (due to his workaholic nature).  He reveals that Hitagi has been more active with him and his life stating that she requested his help for their date.  He also states that Hitagi has started opening her once closed heart – all thanks to Araragi.

Arargi is surprised by this. He tells him that it was Hitagi  who helped herself.  The dad replies with rebuttal, telling the kid that he indeed had influenced her change, that he was with her when she needed somebody the most.

‘The most important thing is just being there when you’re needed.’

Time passes as the two continue to talk.  Hitagi returns and tells Araragi that she’s ready.  She escorts him through the woods (while forcing his head down).  After the short trek, the duo stops at the middle of a field with a blanket on the ground.  Hitagi asks Araaragi to close his eyes and lay down on the blanket.  Next, she ask him to open his eyes.  Upon opening his eyes he is greeted with an alluring sight – a boundless starry sky. 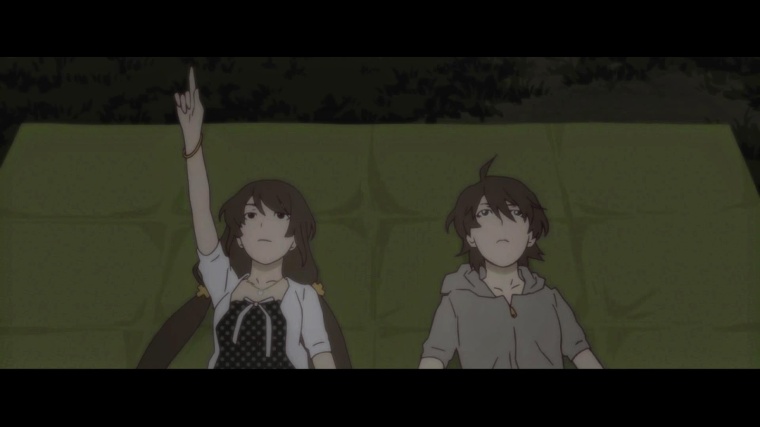 Following a series of questions and requests (such as her offering her body to him), Hitagi explains how she’s afraid that Araragi  may do something similar to her rapist (possibly triggering a flashback we can assume). She’s afraid that an innocent physical action from him might result in her hating him.

She’s afraid of losing him. She fears losing a valued friend – a friend she grew to trust and love.  A friend that she can open up to. Hitagi tells Araragi that she’s happy that she was able to meet him during her days of misfortune.  How he never left her side despite her personal issues in life.

Then, she reveals that the section of the park is  the same spot where her family spent many times with each other during the happier days of their lives.  This spot, she holds close to her heart – a treasured spot. Finally, she asks Araragi to be her first kiss.   The two stare at one another, happy to be in each one’s presence holding hands.

Hitagi has finally opened her heart.  She has finally find happiness after years of a betrayal, misfortunes, physical sickness, and anger.

‘The sting in my words that shut you up
Ended up stabbing my heart
Before I knew it…it hurts
This is your fault.’
-From Staple Stable (Bakemonogatari OP 1)