As the Tournament of Power reaches its conclusion, I am constantly reminded of Dragon Ball Super’s 7th ending theme: An Evil Angel and Righteous Devil.  Towards the end of it, there’s a line that goes “Justice and evil both carry the same gun”.  I couldn’t help but think about the song when Toppo tells Frieza that “Justice…is worthless now” during their […]

As the Tournament of Power reaches its conclusion, I am constantly reminded of Dragon Ball Super’s 7th ending theme: An Evil Angel and Righteous Devil.  Towards the end of it, there’s a line that goes “Justice and evil both carry the same gun”.  I couldn’t help but think about the song when Toppo tells Frieza that “Justice…is worthless now” during their battle and Toppo’s resolve (to become a God of Destruction and forego his morals).  The theme of justice is played with Toppo throughout the Universe Survival Arc. Toppo is a proud warrior of justice; leading his Pride Troopers to battle after battle in the name of all that is righteous. 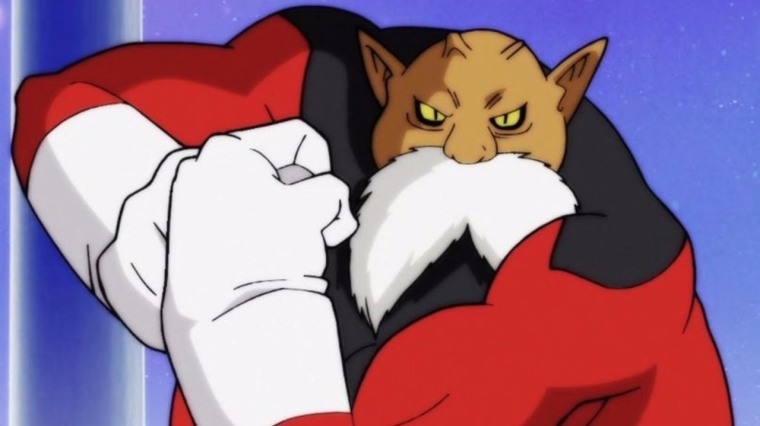 From analyzing Toppo’s personality, he holds justice, morals, and honor with the utmost respect.  He fights fairs: preferring honest play over cheap tactics.  This is shown when Toppo snapped on Android 17 for attacking the Kamikaze Fireball (during their transformation).   He questioned the motives of the Tournament, The Grand Priest, and Zeno-Sama.  Toppo doesn’t feel right about fighting in a tournament designed to wipe out multiple universes; a tournament in which countless lives will end upon each universe’s erasure.

Toppo and his Pride Troopers initially entered the tournament to punish those who they deemed “evil”.  While survival was ideal, targeting evil doers were their prime goal. However in episode 104 of Super, Toppo started to change his mind.  With seven of his men gone and his universe at risk of deletion, Toppo decides that the Pride Troopers must kill their ideologies of justice and ethics in order to live.

There’s no place for justice and heroism in a war of survival.

Towards the end of the tournament, Toppo is struggling against Andoird 17.  After analyzing 17’s combat style (and discovering 17 has infinite energy), Toppo decides to end his battle with 17 with one blow.  However, he fails and is forced into a beam struggle with the Universe 7 warrior.    During the struggle, Frieza attacks Toppo from behind.  Frieza taunts Toppo while blasting him with Death Beams. Bored with Toppo, Frieza attempts to blast Toppo off the battlefield; enveloping him with overwhelming energy.

Despite the struggle, Toppo survives but is heavily wounded.

Frieza taunts Toppo once more.  He mocks the man, calling him trash.  He then points out how shameful it must be for Toppo to have his prized uniform of justice in shreds.  It’s here where Toppo snaps.  Coldly, Toppo replies that justice is worthless.  After seeing his men fall and the destruction of six universes before him, Toppo comes to a resolution.  Justice is worthless.  It has no use on the battlefield.  Justice doesn’t translate to survival. 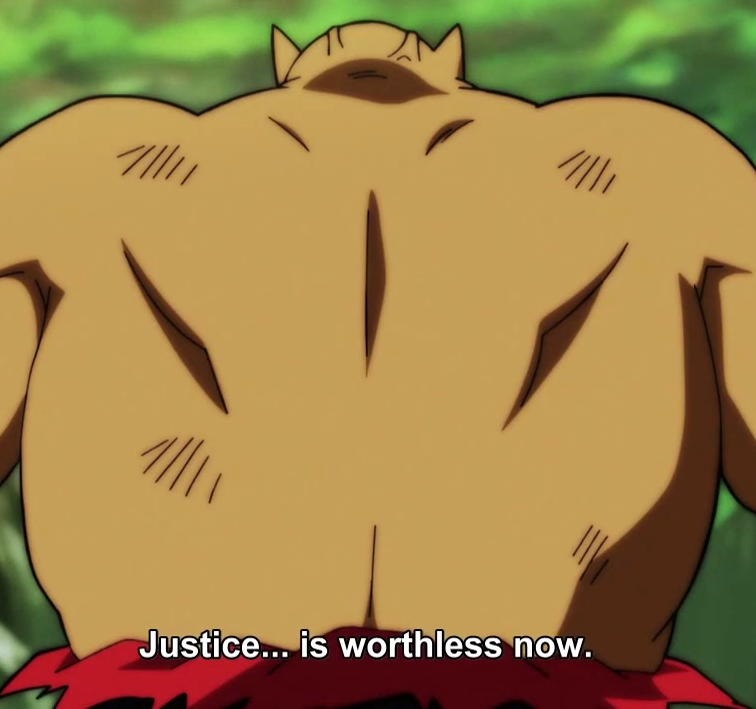 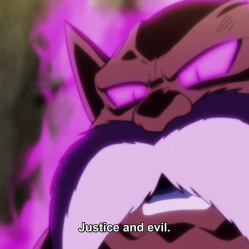 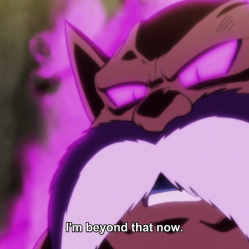 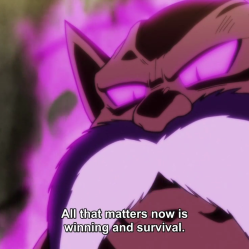 In order to survive,  Toppo gives up on justice.  This same man who praised it with pride now sees it as a waste. A liability even.  Toppo decides to ascend to godhood: A God of Destruction.  Destruction – like war – is neutral.  It doesn’t care about silly ideas like good or evil, justice or injustice.  All it cares for is annihilation and death.

What good are both justice and playing hero if both things never ensure survival?

‘There’s only one difference between heroes and madmen: It’s whether they win or lose.’