“Be your true mind.” -Revelations: Persona Japanese tagline. Starring into the screen of the gaming P.C. I brought off my friend during the 2018 Holiday season, I noticed that there was something missing: A wallpaper – a good one.  I was using fanart of Yugiri from Zombieland Saga as a placeholder until I could find wallpaper that I wouldn’t mind […]

Starring into the screen of the gaming P.C. I brought off my friend during the 2018 Holiday season, I noticed that there was something missing: A wallpaper – a good one.  I was using fanart of Yugiri from Zombieland Saga as a placeholder until I could find wallpaper that I wouldn’t mind always seeing. Don’t get me wrong: Zombieland Saga is an awesome anime and  Yugiri is best undead girl, but I needed something better. A wallpaper to serve as a reminder to do whatever the fuck I want to do throughout the year 2019

I hooked up an old external hard drive containing over ten years’ worth of anime and manga fanart, screenshots, manga panels, and memes; most of them were  perfect to use as wallpaper, but I desire one that would be my mantra for 2019.  As I browsed through the drive, there was a certain image with a manga panel snapshot that spoke to my soul.  It was of Kyoko from Puella Magi Madoka Magica with a pocky stick in her mouth offering a box full of them to somebody off-screen.  As she chew on the snack, she says the following:

“Who cares what anyone else thinks? It’s your life – do whatever you want to do. That’s the right way to live.”

There was no hesitation.  Instantly, that became my wallpaper; vowing to never change it until January 1st, 2020.  Throughout my life (until I got into my 20s), I was concern about what others thought about me.  Wanting to not offend my friends, family members,  and bosses (surprising, right?); I followed their suggestions, putting my own thoughts to the side.

I believed that if I put myself first, it would paint me as a hard-headed selfish asshole.
I should had been an asshole.

“To be quiet and do as you’re told, that’s the cowardly choice.”

Go to church because the rest of the family were going; despite the fact I’m secretly don’t follow religion. Enroll in a community college my parents wanted me to go; regardless if I wanted to go to one outside the Midwest (my home region). Hang out with friends even though I actually wanted to stay and relax at home.  Go into work on my off day when I knew I wanted to tell my boss to fuck off.

Deep within my soul, my “easy-going” public persona was clashing with my true feelings.
I truly didn’t want to do what people told me to do, but I didn’t have the balls to admit it.

This went on until I turned 23.

I dropped out of college. Smartest move of my life.  I stopped going to church. I don’t need Jesus to be a good person. I ignored my boss’s phone calls for me to come into work.  He got the point soon after.   I cut off friends who didn’t respect the fact I didn’t feel like hanging out with them when I was tired. They were fake friends – I didn’t need them around.

Soon after I selected the image of Kyoko as my wallpaper, I got a reminder from My Anime List that Mob Pyscho 100 Season 2 was starting soon.  Fitting.  Mob (the hero of the Mob Pyscho 100 series) is a kid who decided to follow his own path in life; as opposed to listen to others people’s suggestions for his life.  For example: when the supernatural club at his school tried to get him to join (because of his psychic powers), he rejected their offer. He joined the athletic club instead to build muscle.

The anime is one of the ultimate showcases of being your true self.
But, Mob may have appeared to have forgotten about this.

Wanting to impress his crush Tsubomi, Ichi (who catches Mob sneaking a peek at Tsubomi) comes up with a plan for Mob to court her attention: Have him run for the recently vacant student council president position (it was a ploy for Ichi to have Mob gain popularity so she could have him as the new leader of the recently dismantled (LOL) cult). She even went as far as writing a speech for Mob, in her own words.  Despite not caring for school politics and social structure, Mob agrees to Ichi’s self-centered plot – reluctantly. And by reluctantly, I mean that Mob completely froze during his speech.
On stage.
In front of the entire student body – his crush in the crowd included.

It’s goofy that a guy like Mob, who was always dead set on doing his own thing, decided to follow the path of another person. Sure, it was to impress his crush, but the plot wasn’t from his own driven nature and ideas.  Despite the public embarrassment, Mob “won” the heart of a female classmate: Emi.  She was “impressed” by his courage to stand on stage in front of the school, which spurred her into confessing her “feelings” to him. The two started dating soon after.

Obviously, their relationship is rooted in compete bullshit.

When Emi asks what type of work he does, Mob is about to tell her about his supernatural works and adventures but feared that she’d be creep out.  He comes up with  a bold-face lie; claiming he works for a bookstore. This excites Emi as she’s an active and avid reader and is writing her own novel.  She even offers Mob to read it, which he agrees to.

Later on, as Mob reads Emi’s novel, she confronts him. She asks why he still walks her home from school after  he rejected her. Furthermore, she reveals that she knew Mob was going back to his club after he had walked her back home; thinking that Mob was afraid that he would upset her if he stop.

She also makes the connection that Mob only ran for class president because somebody told him to do it, since it was clear that he didn’t write his own speech. Then she bluntly asks if he has trouble making up his own mind and following his own feelings, which Mob confirms.

Finally, she reveals a secret about herself: She too struggles with being her own person – like Mob himself. She only asked Mob out on a dare and was pressured by her “friends” to do so (based on Mob’s pitiful performance during the elections). She was scared of being rejected and seen as a laughing stock by her “friends”, so she followed through with their cruel prank.

They agree to end their “relationship and part ways soon after – only to meet up again.

The “friends” Emi worked hard to impress and not offend?
They weren’t truly her friends.

Emi regroups with her friends after receiving a text message from them.   She decides to show her “friends” the novel that she was working on.  One girl snatches it from her hands and started to laugh and belittle her work along with the rest.  Another girl, while trying to hold in her laughter, ask Emi if she was being serious about it.  Emi (clearly upset and defensive), gives off a weak chuckle and replies she was only doing it for fun. The girls starts to laugh cruelly as they destroy her novel. 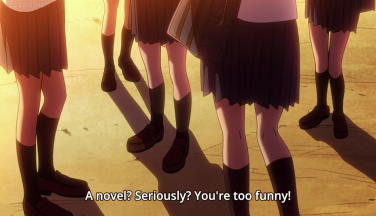 Emi became the thing she feared the most: a laughing stock among her friends.
Not because she didn’t “date” Mob, but because she had a passion for writing.
If they were truly her friends, not only would they not pressured her into dating Mob (something she never wanted to do), they would have encouraged her to keep writing.

As Mob walks back home, he sees the girls destroying Emi’s novel. He confronts them, telling them how wrong they were to do that to her and her hard work.  He starts collecting the pieces off the ground. Confused, yet feeling appreciated, Emi helps Mob out and her fake friends leave the duo to be.  The two try their best to recover the novel but the reminding pieces are blown into the wind. Emi gets discourage and decides that they should call the novel a total lost.

At this point, Mob decides to be honest with Emi (as she did with him) and reveal his true self: The fact that he’s a gifted esper. He uses his powers to completely restore the torn novel; which impresses Emi (as well as Tsubomi – who was watching the events from afar). Perhaps it was because that Emi was honest with Mob about her feelings, fears, and insecurities that led Mob into helping her. Maybe Mob was happy that he knew somebody who too was scared to be their true self and wanted to help them.

Regardless, at the end of the episode, both Mob and Emi was able to embrace who they truly are without fear. I believe there’s a lesson to be learned from the first episode of season two of Mob Pyscho 100 2.

The lesson?  Put yourself first, be honest with who you are, and never fear about what others may think about you. Once you can do all that, you have truly become free.  People may call you selfish or self-centered for being you, but in reality, humans are selfish by nature. Some humans are braver with their selfish nature than others.  If somebody complains about your egocentric nature , don’t take it personal. They more than likely are projecting their anger of not having the courage to be selfish.

Right now, there are people who are completely unhappy with their lives. Why? Because they were controlled into following somebody else’s path. They never had the courage to stray off the path that wasn’t design for them. There are doctors, lawyers, and dentists in those positions who are completely miserable because they decided to listen to their parents’ wishes. They feared to bring “shame” to their family and enter a career field they hate.  If only they would have follow their heart instead, perhaps they wouldn’t be miserable.

Remember this: You have the freedom to be your own person.
It’s your life. Who cares if anyone gets upset?