‘This game will not have a happy ending.’ -Bernkastel, Umineko no Naku Koro ni Major Spoilers: I lied.  Sayori is the final boss. Warning: You should already know by now I play this game and write about it drunk. I was warned that DDLC wouldn’t have a happy ending.  I shouldn’t sweat it too much; given I’m a fan of […]

‘This game will not have a happy ending.’
-Bernkastel, Umineko no Naku Koro ni

Major Spoilers: I lied.  Sayori is the final boss.
Warning: You should already know by now I play this game and write about it drunk.

I was warned that DDLC wouldn’t have a happy ending.  I shouldn’t sweat it too much; given I’m a fan of Umineko no Naku Koro ni: A 07th Expansion visual novel that too didn’t end happily.  The first half of my favorite Fire Emblem game, Fire Emblem 4: Genealogy of the Holy War, also didn’t end well.  And my favorite Persona game, Persona 3, had a depressing ending.  (Jesus fuck, maybe I’m secretly sad that’s why I like downer endings) Did I spoil myself on the bad ending for DDLC?  Yes.  But, I think by spoiling it, it drove me to finish the game (to see how sad and depressing the game ending is).  To tell the truth, I love it when consumer media concludes with a downer ending.  The happy ending thing is played out.  Fuck that happier ever happy shit.

Sometimes, you need a reminder of how brutal and unfair life can be.

After killing Monika I restarted the game.  It started as normal, expect Monika isn’t on the title screen.  Yay!  The wicked bitch is dead!  The game resume starting with act 1 like nothing happened expect the recently revived Sayori is now the president….Shes’ gonna be self-aware like Monika, isn’t she? In any case, MC  — rather, the player – joins the Literature Club.  Given Sayori’s position on the screen, she is the club’s president.  Yuri is on her left, so I’m assuming she retains her vice-president role.  The BGM is the title screen music.  Ya know, with the piano playing the melody.  Didn’t Monika play the piano?  Hold up…

Sayori gets all happy that the MC has joined her club.  You know, it’s kinda depressing:  Sayori is happy  Everyone is acting normal like they didn’t go through the chaos from Monika. Yet, we the players knew what these girls went through.  We know what is to come.  And there’s nothing we can do about it.

As the girls celebrate the formation of the club, I couldn’t help but notice how more friendly Natsuki and Yuri are towards each other.  In Act 2 they were at each other throats, belittling one another and judging their hobbies.  In Act 4 however, they seem to respect one another, with Yuri wanting to learn more about manga and Natsuki wanting to learn about novel through Yuri.  What did I say in my Act 2 Part 2 writings?  Natsuki and Yuri could get along and become close friends – best friends even.

(To tell the truth, I’d love to see a mod or a non-h doujin with  Natsuki and Yuri as they form a powerful bond. Natsuki could help Yuri overcome her fears, become more confident with herself, and fight her bullies. Yuri could help Natsuki learning about the arts.)

As MC and Sayori speak about how fun the club will become, Sayori thanks me (not MC), for getting rid of Monika.  I start to freak out as I’m still drunk from writing my Act 3 shit and the music becomes creepy and distorted.  Doesn’t help that  I’m wearing earbuds that are programmed to be bass boasted.

I made a terrible mistake, haven’t I?

I’m prepping myself for any jump scares or freaky shit so I may become sober as we get deep into this post.  Which probably is a catch 22 because Sayori revealed that she knew Monika did all the horrible things she did to the girls and the player.  She talks about how MCI made her the happiest girl in the world…hold up, didn’t Monika said some shit like this as well?  Please don’t tell me I gotta deal with another murderous nutjob girl who trying to get with the MC. I already had enough of that bullshit for one play through. 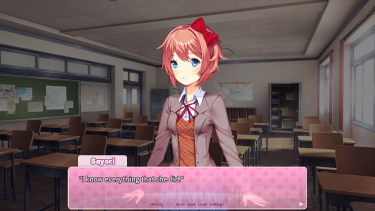 Sigh…do I have to delete another yandere bitch?   To quote a 90s Nickelodeon co-star “Awww here it goes!”

I’m sure the game knows I don’t wanna go through this bullshit again because the first choice of this act is “No.” Thank you game, I appreciate you.  Sayori’s spelling out “FOREVER” was creeping me the fuck out.   Hold up,  the game isn’t saving me…it’s Monika.

Monika starts to hakai Sayori, the club, and the entire game.   After that, she starts to sing the game’s ending theme and the credits roll.  Apparently, I’m missing a few CG shots (given I have yet to tackle the Natsuki route and I didn’t fucking save scum).  Sigh…fuckin’ bad endings. 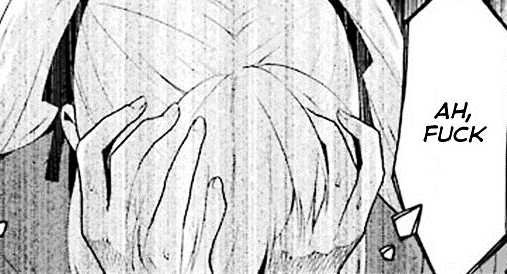 Continued in Yuki’s Revenge Against This Fuckin’ Entry Level VN.